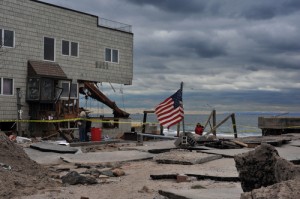 There’s a new illness in town causing rashes, coughing, sneezing and back pain, and no, it isn’t the flu. These symptoms have been attributed to the lingering effects of Hurricane Sandy. “Sandy Sickness” has affected many people in the hardest hit areas, but should we be worried? Dr. Jim Sears investigated by visiting Brick, New Jersey nine weeks after Sandy hit.

Cold related illnesses have tripled in these areas, and there have also been increased instances of diarrhea and respiratory problems. Dr. Sears wondered if perhaps the environment was to blame; many people have been displaced, or are living in homes damaged by the storm. He took to the skies in a helicopter to see just how many repairs still need to be completed. The number of damaged homes in this area was overwhelming. Brick Mayor Stephen Acropolis – who was also affected by major flooding in his own home – is doing everything he can to get his community back to normal. However, there is still a lot of work to be done.

Dr. Sears also made a stop at Coney Island, New York. He was joined by Steve St. Bernard, a local hero who has been helping clean up the area. He’s lived in this area for 14 years, and his young daughter has developed a rash as a result of Hurricane Sandy. Steve admitted to feeling grit and sand in the tap water in his home after the storm. Steve’s neighbors reported problems that varied from respiratory issues to sinus pressure.

Later, on Manhattan, Dr. Sears took a look at what’s causing a lot of these issues: mold. He visited Dr. Philip Tierno at NYU School of Medicine for more information. Dr. Tierno explained that chemicals, rat feces and fungus are all factors in this health problem in New York. Flooded areas have led to contaminated water, which is making people sick.

Dr. Sears’ final stop was in Sea Bright, New Jersey. Water damage and mold – even if you can’t see it – can make you very sick, and these are big problems in areas hit by Sandy. Take a look at even more from Dr. Sears’ in-depth examination into Sandy Sickness in the video below.

The Drs: Symptoms Of Mold Exposure

Dr. Nathan Rothman, chief pulmonologist at St. John’s Episcopal Hospital in Far Rockaway, New York, said that he’s seen a 50% increase in the number of hospitalizations from respiratory illness. He sees the large amounts of mold, sand and debris as “attacks on the pulmonary system.”

Symptoms of mold exposure include chronic cough, bronchitis, allergy symptoms, itchy nose and eyes and headaches. If you have water damage in your home, it’s important to resolve the issue as soon as possible.

Hurricane Sandy may already feel like ancient history, but unfortunately, its effects remain very much a part of the present.