The Doctors: Hard vs Soft Toothbrushes

A viewer sent in a video to The Doctors TV Show asking about toothbrushes. She said her dentist has been telling her for years to use soft bristle toothbrushes, but if this is the case, why do they even make hard bristle brushes?

Dr. Bill Dorfman joined The Drs. to answer her question. He said the only reason why toothbrush companies sell hard bristle toothbrushes is because people buy them. 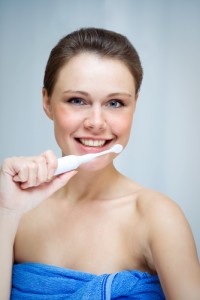 The doctors went out into the field to give people on the streets free toothbrushes, with a choice of soft, medium or firm. One lady chose a medium, and two people chose firm. One lady said she doesn’t like the soft bristles because they seem to wear out easier. Finally, a man chose a soft brush and said the hard ones are abrasive and cause your gums to bleed.

At the end of the experiment, 24% chose soft, 62% chose medium and 14% chose hard. Dr. Dorfman said hard and medium toothbrushes are just too hard, and they damage your teeth and gums, which won’t grow back.

Dr. Travis Stork asked how many audience members use a soft toothbrush, and not many raised their hands. Dr. Dorfman said there’s no appropriate time for a hard toothbrush, and his personal favorite is a power toothbrush, especially the Philips Sonicare toothbrush.

Research has shown that two weeks with the Sonicare will improve your gums tremendously. Philips is also doing a program with the National Children’s Oral Health Foundation where they’re giving free dental care and oral health tips to teens across the  United States.

Everyone in the audience got to take a Philips Sonicare toothbrush home. Dr. Dorfman said that everyone needed to actually use it or else the tooth fairy would come and kill them with a giant toothbrush…scary! Learn more about the Sonicare in the video below.