Did you know that 91% of Americans use cell phones? This is yet another diversion that can lead to distracted driving. This makes you 23% more likely to crash, and The Doctors wanted to demonstrate this with their Distracted Driving health scare experiment on the show.’

A Los Angeles woman made headlines for texting while driving…with a baby in her lap. News reports filled in the details. The woman has six children and has racked up nine traffic tickets for various offenses, including driving with a suspended license and not using proper child safety restraints. 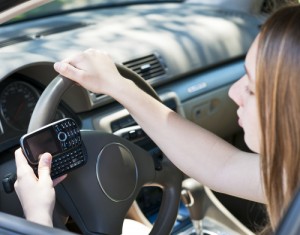 Do you text and drive? The Doctors talked about the hazards of distracted driving & shared accident statistics.

Dr Travis Stork said it’s very easy to be judgmental of others, but a quick survey of the audience and panel revealed that almost everyone was guilty of distracted driving. Dr Lisa Masterson admitted that she used to change clothes while driving.

Even eating at the wheel or having a conversation with someone in the car can be a distraction. The results could be life-altering and devastating. “You’re not just putting your health in danger. You’re putting the health in danger of other people on the road, other passengers in the car,” Dr Travis said.

A concerned wife, Melody, turned her husband Justin in to the show, “because his driving scares me,” she said. The couple has two children. But Justin isn’t alone in his texting and driving habits. According to one stat from the show, 71% of adults 18-49 admit to talking or texting on a phone while behind the wheel.

Justin said he is a good driving, but Melody said Justin doesn’t even wear a seatbelt. He said a seatbelt constricts his chest. Melody is concerned because Justin has an old football injury and is concerned about what could happen to him in an accident. The show said that about 6000 people died in Distracted Driving accidents in 2008; more than 500,000 people were injured.

“I’ve never thought about how it would impact my family if I was in a car wreck,” Justin admitted. Dr Travis said that men can be stubborn, and suggested that his story is relatable.

The Doctors teamed up with the California Highway Patrol and American Medical Response for an accident simulation. Justin didn’t know what he was getting into as part of the experiment. The dramatic simulation involved emergency personnel and aid from first responders.