The Doctors shared a startling wake up call about the consequences of Texting & Driving, and other causes of Distracted Driving accidents. Their Health Scare Experiment simulated a devastating accident to show one family how their lives could suddenly change. Next, it was time for them to meet someone with a firsthand perspective of this experience.

Dr Travis Stork “estimated that 80% of all crashes and 65% of near crashes are caused by distracted driving.” He recalled the accident simulation that Justin and Melody experienced. In the scenario, two people in the other vehicle did not survive the crash, and the couple learned that Justin might never walk again. 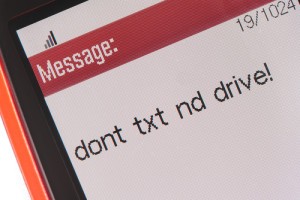 The Doctors simulated a distracted driving accident and met a woman who was paralyzed in a crash.

Back at the UCLA Medical Center, Justin and Melody met a woman named Kelly, who is paralyzed in real life because of a spinal injury. She told them about the car accident that changed her life 13 years ago.

She talked about the role Distracted Driving played in her story, and recalled that her friend, who was a passenger in the car, was not injured in the accident. “I wasn’t as lucky, because I wasn’t wearing my seatbelt,” Kelly said. Earlier, Justin admitted that he rarely wears a seatbelt.

Kelly talked about how life changes when you have a spinal injury and are paralyzed. “Imagine putting a pair of pants on without moving your legs,” she said. She also pointed out how Melody would have to help support Justin as he re-learned how to perform basic daily activities.

With more than 5 million traffic accidents every year in the US, it’s still startling that about half of them involve Distracted Driving. Kelly pointed out how she has trouble reaching shelves or cabinets from her wheelchair.

“You’ll be surprised at how many simple things that were once easier are now going to be more challenging,” Kelly said. “Simple things like going through doors.”

Back in the studio, Justin and Kelly joined The Doctors on the stage to reflect on the lessons and message of the simulation. Justin admitted that reality sunk in the moment the simulation began, when he saw the shattered windshield and the damaged car in front of him.

Dr Travis Stork emphasized how much pain these accidents can cause in the lives of those around you and the ones you love. “I don’t think you think about it until you’re actually in that situation,” Justin’s wife Melody said. She admitted that she is also guilty of texting and driving, but she learned a lot as well.

Kelly said she had bad driving habits years ago, and knows she wasn’t paying enough attention to the road. Now she has a spinal cord injury and is “paralyzed from the chest down for life.”

Dr Lisa Masterson said that Kelly sets a great example of how you can live with this type of injury. Kelly said she feels like this is the right thing to do so she can warn others against making the mistakes she did.

Dr Travis asked Justin what he learned from the simulation. Justin said that he and Melody are committed to making safer driving choices. Actually, all he promised was that he’d wear a seatbelt. What about texting and driving, dude?