Every day, more than 500,000 911 calls are made in the United States. According to Dr. Travis Stork, if you haven’t made a 911 call yet, chances are you probably will some time in your life.

Several weeks ago, 911 dispatchers were overwhelmed with calls when a gunman opened fire in a movie theater in Colorado. Sadly, 58 people were injured and 12 died.

Best friends Allie and Stephanie were in the theater during the shooting, and sat down on The Doctors to share their story. Stephanie said she knew something was wrong when the gunman released gas canisters.

Stephanie said at first they thought it was just a gag, and part of the movie, but then the air started to smell and burn. She said her first reaction was to get down, and her second thought was, “Where’s Allie?”

Allie had been shot. With a shotgun, there is the main pellet and then there are smaller buckshots, and she was hit with 32 buckshots.

She was sitting in the aisle seat and immediately fell into the aisle after being shot. She was trampled by people running out of the theater. Allie said at first she thought the gas canisters were grenades because they were so loud. 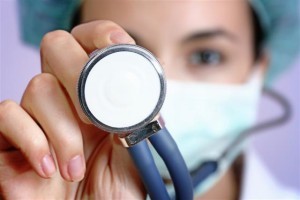 After Allie was injured in the Aurora, Colorado movie theater shooting, her best friend Stephanie applied pressure to her neck wound and saved her life.

The Doctors: Allie Was Shot in the Neck

Allie tried to yell for help, but that’s when she realized that she couldn’t breathe.

Stephanie said that when the two girls were lying in the floor in the theater and blood was pouring out of Allie’s nose and mouth, she thought she might not walk out of there with Allie alive.

Allie told Stephanie to get out of the theater, but Stephanie decided that she wouldn’t leave her best friend.

Stephanie put her fingers over Allie’s neck wound and applied pressure to it. The girls had no medical background, and Allie said that from watching doctor shows on TV she guessed that she had been hit in the lung as well because she was coughing up blood.

Stephanie also put Allie on her left side to try to keep her airway clear since she couldn’t breathe. She said that while they were lying down, the gunman was walking around the front aisle executing people.

Stephanie said that while trapped in the theater, they just had to wait it out, pray to God and hope for the best. Dr Stork said Allie’s injuries were notable to him because usually with neck wounds like hers, you are the only person hurt and you call 911 and they come and take care of you, but in this case, there were 57 other people who had injuries.

Dr. Stork asked Allie and Stephanie if they had ever thought about what they would do in an emergency situation, even something less severe like a car accident.

Stephanie said that an event in her past may have prepared her for the night of the shooting. Stephanie moved back home when she was 19 and brought her German Shepard/Rottweiler with her.

One night, her dog got into a fight with her mom’s Miniature Pinscher, and her mom’s dog was bleeding profusely from the neck. While her mom was in a panic, Stephanie told her mom to call 911 and then put flour and pressure on the dog’s neck to help clot the blood.

Dr. Stork said that people don’t need to worry about the flour, but applying pressure is essential.

Allie said that she and Stephanie finally got to a railing in the theater so that she could get herself up, and then they walked out. Once they were outside, a random man picked Allie up and carried her across two parking lots and up a hill to the nearest ambulance. She said she waited five to 10 minutes before she received any medical attention.

The Doctors: How To Stop Bleeding

Dr. Stork and Dr. Lisa Masterson applauded Stephanie for saving Allie’s life. The doctors then did a demonstration to show exactly how Stephanie helped Allie.

If someone is hit in an artery like the carotid artery, you will see pulsatile flow from their neck. If they are hit in a vein, the blood more likely will just be pouring out.

Dr. Stork said that he sees a lot of cases in the ER where people who don’t like the sight of blood will just put a piece of gauze over the wound with no pressure, and by the time the injured person gets to the hospital they have lost too much blood.

He said that you need to get gauze, a shirt or anything you can find and apply direct pressure to the wound, because this will prevent the majority of blood loss. You need to hold it until help arrives.

Once you are applying pressure, you will not see as much blood on the gauze. If the gauze is blood-soaked, you are probably not applying pressure in the right area. Dr. Stork said that you don’t need a medical degree to save someone’s life.

Allie said that she may or may not need more surgery on her neck because her right vocal cord was paralyzed. Her right arm also had a lot of nerve damage, and she still has bruised ribs which will just take time to heal.

Events like the shooting in Aurora, Colorado are sparking more awareness nationwide. The mayor’s office in Houston, Texas has put together a tutorial to teach their employees what to do in the case of a similar situation.

The video says to try to evacuate, even if others are insisting you stay behind. Once you are safely outside, try to prevent anyone else from walking into the building, and call 911.

If you can’t get out, you need to find a place to hide. Act quickly and quietly, and try to secure your hiding place. Remember to lock the doors, turn off the lights and silence your phone. If you can’t find a closet or a room to hide in, try to stay behind large objects.