America loves chicken, in any way we can get it. Wings, nuggets, chicken breast and more are a $70 billion industry.

But The Doctors are getting to the bottom of what really goes into your meals and your mouth. Chef Rocco DiSpirito joined the team for an investigation of how America’s food is processed. 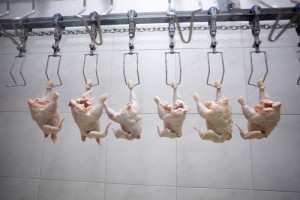 Did you know that most chicken is treated with Chlorine before it comes to your table?

The Drs TV: Protein in Chicken

Chef Rocco noted that chicken is a great source of lean protein. “It tastes like chicken,” Dr. Jim Sears joked.

Dr. Travis Stork revealed the shocking truth that most processed chicken is soaked in a chlorine bath after slaughter. Chlorine is used to prevent cross contamination and kill bacteria. He said four major companies confirmed to the show off camera that this is how they process chicken.

Chlorine In Your Chicken

The idea with Chicken Chlorine Baths, as with Pink Slime & Ammonia, is to protect consumers by killing possible bacteria. But the safety question is about how much Chlorine is used.

“That’s up to 50 times stronger than your average swimming pool,” Dr. Travis said. The reason behind this is to kill bacteria, so The Doctors put this to the test in a lab, to see if Chlorine would kill Salmonella.

Cliff Coles, a food scientist at the California Microbiology Lab, performed the tests. He explained that they infected one bird with Salmonella, bathing it alongside healthy birds to determine whether the contaminants would spread.

But he said tests of the water revealed that other bacteria spread among chickens in both tests, which means these methods are only partially effective. The 50 ppm tank had less bacteria, but it was still present.

Chef Rocco DiSpirito had some ideas about the problems with food safety in America.

“When it comes to food in this country, we don’t want to spend any money,” he said. “Perhaps we should invest a little bit more in food, and they won’t have to figure out how to economize the process so much.”

Dr. Travis said as much as 5% of Chlorine can seep into the chickens themselves, which could affect the flavor. But the solution to that for food manufacturers is called Plumping, a salt water injection, that will mask any Chlorine flavor.

Dr. Jim said that this adds a lot of sodium to the chicken, mitigating some of the health benefits and straining kidneys, especially in children. Dr. Travis said you should carefully read the fine print on your chicken packaging to check the sodium levels.

The Doctors said you don’t have to give up chicken, and that there is a movement toward free range, organic chicken farms. David Pitman of Mary’s Chickens gave a tour of his farm, where chickens roam free and live humanely.

David said that the keep the birds moving, and feed them a vitamin-rich vegetarian diet free of antibiotics. He also explained that they air chill their chickens instead of treating them in water and chlorine.

He said the advantage comes in the flavor, which doesn’t have to contain Chlorine or additives.

How To Buy Healthy Chicken

Dr. Travis asked Rocco for tips on what to do, noting that Organic options are not always affordable for everyone.

“When it comes to meats, organic is an important principle to adhere to,” Rocco said, adding that you can save money by buying a whole bird instead of individual cuts.

Dr. Jim said if more people would start buying organic, the prices would come down.

All Natural Vs Organic Chicken

Dr. Travis pointed out that “All Natural” is not equivalent to “Organic.” There are no standards or oversight for “All Natural” products, so he recommended reading the nutrition labels and reading the small print to know what you are buying.