Today The Doctors are looking at what’s really in America’s food supply, and what you need to know the next time you are buying dessert, or even plain old chicken breast.

To get to the bottom of their food investigation, The Doctors invited Chef Rocco DiSpirito as their guest.

“I always liked playing doctor as a kid, so it’s fun to come on and play doctor with you guys,” he said. 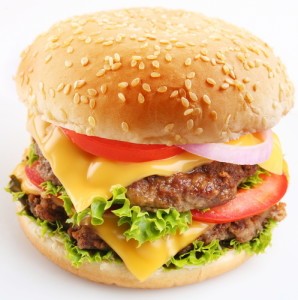 The Doctors spoke about the meat preservation process Pink Slime, which treats discarded meat with ammonia.

How dangerous is sugar? It’s easy to think of it as that sweet surprise we enjoy at the end of a meal, or each morning in our coffee. But according to news reports, some are calling for it to be regulated like alcohol and tobacco, because it is a much more dangerous substance than you think.

Pediatrician Dr. Robert H. Lustig contributed a piece to Nature, calling sugar a deadly toxin in need of regulation. Short of regulation, he suggests taxing it, in the same way legislators went after cigarettes.

Should Sugar Be Taxed?

Dr. Travis Stork said guidelines recommend no more than 8 teaspoons per day, and the limit for kids is just 3 teaspoons. But most Americans eat 30 additional teaspoons of sugar throughout the day. Dr. Andrew Ordon said obesity is a growing problem, eclipsing alcohol and smoking when it comes to causing deaths.

Critics said this could help people tame their sweet tooth. But The Doctors asked people on the street to weigh in. Public opinion seemed rabidly opposed and skeptical to this idea.

What do you think about this idea?

Dr. Travis said everyone should have the right to choose what they eat. But he said there’s a hidden economic cost to all the sugary foods in our diets today. He explained that too much sugar can lead to obesity, and the average obese woman will spend an extra $4,879 per year on living expenses.

He said that a small tax on sugar would not add up to $5,000 a year. The health cost of a can of soda or sugary snack might make people think twice about indulging.

Chef Rocco DiSpirito pointed out that some foods contain carcinogens, and regulators don’t target those. Dr. Travis said this type of tax would lead food manufacturers to innovate healthier products, which would save consumers money.

Chef Rocco said education is key to changing people’s behavior. But Dr. Travis pointed out that sugar is addictive, and education alone can’t fight physiological addictions. He explained how addictions light up the Dopamine pleasure centers in the brain.

He explained that sugar addiction floods the brain with Dopamine, but it also leads to increased Insulin production and other health consequences. There are diminishing returns over time, causing you to eat more sugar to get the same effect.

“If we don’t find a way to decrease the amount of sugar in our food, their prediction is that one in three of us will have diabetes by mid-century,” Dr. Travis said.

Chef Rocco said that 17% of Americans’ calorie consumption is from sugar. But he said you can break the habit by taking small steps over time, to wean yourself off sugar.

The Doctors explained the phenomenon of pink slime, which is gaining media attention. Pink Slime is produced when “discarded beef cuts and fat” are treated with Ammonia Hydroxide, resulting in this Pink Slime. Gross!

As much as 70% of processed burgers probably contain Pink Slime, though recent outcry has spurred some fast food chains to change their practices.

To demonstrate what goes on here, Dr. Travis poured some Ammonia into a bowl of raw meat. He explained that the Ammonia kills bacteria on the meat. “Why would you be using discarded cuts in the first place?” Dr. Andrew asked.

Chef Rocco said that chefs and butchers know how to use all types of meat, so if something is discarded, there’s probably a good reason for it.

“Part of the pride in being a chef is that we know what to do with everything,” he said. “But at some point, we know there’s only garbage left, and we can’t do anything with it, and it needs to be thrown away.”

Dr. Jim Sears said this process is designed to preserve meat that must be shipped, stored, and frozen. He showed a photo of a fast food burger he purchased 12 years ago. It contained so many preservatives that bacteria and mold won’t eat it, so it looks as new as if you’d bought it yesterday.

I’ve seen this trick online with Happy Meals. It’s gross, and it should really make us think twice about the nutritional tradeoff we are making for the convenience of drive thrus.

Dr. Travis pointed out that the USDA, the organization charged with protecting our food supply, deems this meat treatment process safe, and says it benefits us by killing deadly bacteria such as E. Coli.

Dr. Travis said McDonald’s, Burger King, and Taco Bell have all changed their practices to discontinue use of Pink Slime in their products. Fast food chains In & Out Burger, Jack in the Box, and Wendy’s claim they have never used Pink Slime meats.

But Dr. Travis said school systems that make lunches for America’s children still gleefully serve up Pink Slime every day on those plastic trays. Chef Rocco said it doesn’t make sense to use Ammonia, which is a floor cleaner, to treat meat.

Dr. Travis said you can avoid Pink Slime and get fresher products by choosing local meats and vegetables.