The Doctors: Medication Side Effects

Dr. Jim Sears said some of the side effects may not be caused by the medication, but “if something happened to a person while they were on the medicine, then they’ve got to list it.” Dr. Travis said every medication has potential side effects, so there is no such thing as a risk-free approach. 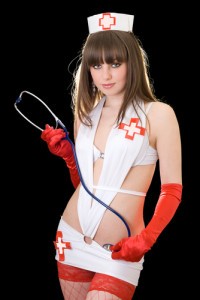 “Is spinning supposed to feel like you’re having a heart attack?” a woman asked during her workout. The answer is no, and if you’re having those types of physical reactions to exercise, you should probably call a doctor.

But Dr. Travis shared a study of spin class students and their blood. It found that Triponens, enzymes associated with heart attack, were elevated after an hour of intense spinning. “If someone took a spinning class, and they were having chest pain, and they had elevated Triponen levels, I would treat them like they’re having a heart attack,” he said.

Dr. Ian Smith pointed out that there’s a difference between Rapid Heart Rate and Chest Pain. The Doctors said if you repeatedly feel uncomfortable after these types of intense workouts, you might want to dial back your efforts or find a less aggressive approach.

Dr. Ian said that popular sporting events can inspire fans to get involved in athletics, but going from a sedentary lifestyle to intense activity can be hard on the body and land you in the emergency room. “A man must know his limitations,” Dr. Andrew Ordon said.

Dr. Lisa recommended listening to your body’s warnings so you don’t overexert yourself. “You could hurt yourself,” Dr. Andrew added.

Does it matter to you what the staff at your hospital looks like? A Swedish hospital is attempting to recruit hot nurses, so The Doctors sent comedian Sharon Houston out on the streets of LA to ask the always entertaining locals if looks matter in health care.

Women of course favored the normal looking nurse as opposed to the hot nurse, noting that she looks more serious and professional. Male opinions were split on the merits of attractiveness in a nurse.

Back in the studio, Dr. Travis explained that the Swedish ad was looking for “TV series hot nurses” to work in their ER. The hospital said it was trying to create buzz, which obviously worked since The Doctors have pounced on it.

Dr. Jim Sears said the company’s traditional ads weren’t getting noticed, and they wanted to ramp up applications for this year. Dr. Ian Smith said you want a qualified medical professional, but there’s nothing wrong with an attractive doctor as long as they know their stuff.

“You have to admit, you’re a very handsome guy,” Dr. Ian said to Dr. Travis. “You would know that people in the ER, when they see you, that they respond differently to you because you’re a handsome guy.”

Does it matter to you if your medical staff is hot? I’ve always wondered how hospital employees, particularly doctors, can justify habits such as smoking or obesity. Shouldn’t they be leading by example?

The Doctors: Ketamine For Depression

Before Special K was a street drug popular at raves, it was used as an anesthetic for surgery. Used recreationally, it can have a number of side effects, including blurred vision, moodiness, confusion, and effects on blood pressure.

But researchers now say Ketamine dosage can be a nearly instant cure for depression, though long term studies have yet to get underway.

The Drs TV: Ketamine Vs Propofol

Dr. Travis compared Ketamine to Propofol, the medicine that is believed to have killed Michael Jackson. He called it a dissociative medicine, administered through IV treatment. On the street, it’s hallucinogenic and could be dangerous because it can cause memory loss.

Dr. Andrew said he uses it for some outpatient procedures and has seen some crazy patient behavior over the years. “It’s a pretty wild drug,” he concluded.

Dr. Ian Smith said the applications for Depression could be useful in situations where depressed patients are suicidal, not necessarily as a long term management medication. “Sort of like a reset button,” Dr. Andrew said.

Since typical depression medications take several weeks before patients seen effects, the immediate relief from this type of treatment could be desirable. Dr. Ian added that this drug works on a different aspect of mental health than more traditional treatments.

The Doctors spoke with Dr. Ken Robbins from the University of Wisconsin – Madison, who is studying Ketamine as a treatment for depression. He called it an exciting breakthrough. He said the effects can be seen in as little as 40 minutes, as opposed to weeks.

Though side effects are a serious risk, preliminary studies indicate that up to 30% of severe depression patients don’t respond to conventional treatment. For these types of patients, up to 70% of them are finding relief with Ketamine in early trials, though the effects only last for one to two weeks.

Ketamine may also have applications in brain cell growth, and there is much more research to be done in this area. Dr. Travis stressed that you should not experiment with this drug at home, because it can be very dangerous and is of course illegal.