The Doctors: Is Holding Your Pee In Dangerous?

Did you know it’s bad to hold in your pee if you have to urinate? This issue always makes me think of the classic Seinfeld episode, where the gang was stranded in a parking garage when nature called. They defended their actions by saying there were health risks associated with holding your pee.

The Doctors showed a video of little Lila and her mother Melissa. Lila never wants to admit when she needs to go to the bathroom. Dr. Travis Stork said a lot of adults hold their urine for longer than they should. 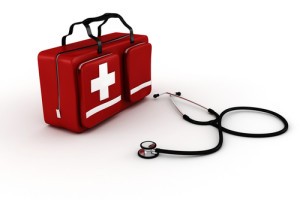 Find out why The Doctors don't recommend getting a doctor kid to evaluate your kids at home.

One reason not to hold it when you have to pee during a long car trip is that, in a car accident, your seat belt could actually rupture your bladder. Great; now I have something new to be paranoid about.

Urine is supposed to flush bacteria out of your body, and holding your urine can delay that process, allowing bacteria to work its way into your bladder from the Urethra.

This can cause a Lower Urinary Tract Infection. In some cases, this type of infection can spread, also affecting your Kidneys. That can lead to back pain, fevers, and other symptoms such as chills and vomiting.

In extreme untreated cases, this bacteria can continue to move through the body, entering the bloodstream and progressing to Sepsis, a systemic infection that could actually kill you.

Sepsis can lead to blood clots, low blood pressure, and serious ailments such as Liver Failure, Pneumonia, and more.

The lesson is, you should always pee when you feel the urge. Dr. Lisa Masterson said that’s why doctors consistently monitor urine during pregnancy, to detect and prevent these widespread issues.

Dr. Travis explained that clear urine is a positive sign. But Cloudy Urine is a cause for concern, and you should alert your doctor if you notice it, to prevent this health problem from spreading.

Should You Own A Doctor’s Kit?

Dr. Jim Sears shared a common question he gets from parents. Should you own an adult version of the Doctor’s Kit?

He said that teaching parents to evaluate their children’s medical problems at home is not as easy as it may look. “It really takes awhile to tell the fine difference between normal and not normal,” he said.

How A Stethoscope Works

He explained how a Stethoscope listens to the heart and lungs, listening for any abnormal sounds or arrhythmia. He played the sound of a Heart Murmur as an example of a subtle difference doctors listen for.

Dr. Travis said moving the Stethoscope around lets doctors listen to different parts of the heart.

How An Earscope Works

Next, Dr. Jim looked inside a child’s ears, demonstrating what doctors and pediatricians look for during an examination.

He showed examples of slides with conditions such as Ear Infection or Fluid in the Ear.

“I’d rather you bring your child in because of symptoms, instead of what you’re seeing or hearing” with doctor’s tools, Dr. Jim said.