Dr. Travis sat down with Dr. Allen Frances, author of Saving Normal, whose book is about the over-medication of America. Dr. Frances said that America has tens of millions of people on psychiatric medication. He said it’s very hard to get disability now unless you have a psychiatric diagnosis. He said that 80 percent of psychiatric medication is prescribed by non-psychiatrists, often with little training, excessively influenced by drug companies, and with just seven minutes to make the conclusion. 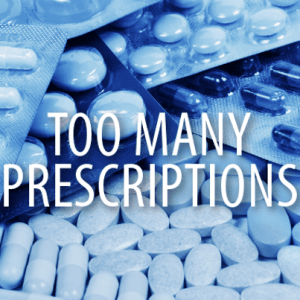 Are doctors over-diagnosing psychiatric conditions? Dr. Allen Frances,thinks so. He talked about what to do if you get a psychiatric diagnosis and what to watch out for. (sarkao / Shutterstock.com)

Dr. Frances said that since he wrote Saving Normal 20 years ago, there’s been a number of “epidemics” affecting kids. He said there’s been a 40 times increase in childhood bipolar disorder, a 40 times increase in autism, and ADD has tripled. Dr. Frances said he thinks that some people today are getting treatment now that wouldn’t have gotten it before, but he said it doesn’t account for these enormous increases.

The Doctors: Over-Diagnosis Of Depression

Only one third of people with severe depression have seen a mental health professional or a doctor in the last year.

If you feel sadness, loss of interest, loss of appetite, less energy, and you feel this for two weeks after you lose the love of your life, that’s called major depressive disorder now by professionals according to Dr. Frances. He said that we’re mammals and we love. It’s adaptive and part of life. But what the medical community is doing here is medicalizing normal grief and substituting medical rituals for healthy, normal rituals.

The Doctors: What To Do If You Get A Psychiatric Diagnosis

Dr. Frances said that if you’re given a psychiatric diagnosis, you should be informed and ask a lot of questions. He said you shouldn’t be satisfied with obscure answers and you should get a second or third or even fourth opinion.

Second, you’re probably seeing the doctor on the worst day of your life. He said that time and change of circumstance will make most people better in a couple of weeks from their extreme feelings. Don’t jump at a diagnosis prematurely.

Thirdly, it’s important to take this seriously. Getting a diagnosis can change your whole life. He said that a diagnosis should be taken as seriously as who you marry and the house you buy. Make sure you give it the appropriate weight.

Dr. Frances said the single best thing someone can do if they have minor problems is exercise. He said for minor problems, everyone should be concerned about the over-selling of medicine. The everyday problems most people deal with do not require medication.

Dr. Frances said there are five solutions to over-diagnosis in this country: