A woman named Miesha explained on The Doctors that she and her boyfriend Bryan met about eight years ago in college, and they’re both professional MMA fighters that fight for the UFC. They know that their lives could literally change in a split second.

Miesha and Bryan decided to take Bryan’s parents on a vacation to Mexico. They decided to all go snorkeling in the ocean together, when Miesha and Bryan got intrigued by a swarm of fish that were following the tour guide. As they were snorkeling, they looked back and saw Bryan’s mom’s body laying lifeless on the back of the boat. Bryan heard his dad yelling his mom’s name. 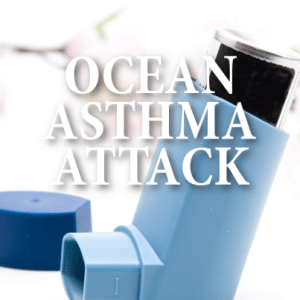 The Doctors looked at the story of a UFC fighter who saved the life of her boyfriend’s mom after she suffered an asthma attack while snorkeling in the middle of the ocean. (mayer kleinostheim / Shutterstock.com)

At that point someone had already pulled him mom, Chris, out of the water, and removed her life vest. One of the tour guides was giving her CPR. When Miesha and Bryan got back to the boat, they realized she wasn’t breathing at all. Miesha told Bryan he had to give her mouth to mouth. Bryan felt like he was unable to get much air into his mom, and Miesha said Chris was starting to turn purple.

The blood vessels were breaking all throughout Chris’s face and Bryan started to get upset, thinking it was his fault his mom was dying. Miesha said Chris’ eyes latched onto hers and she felt like she was “literally looking into her soul.” She felt like it was a matter of seconds before they were going to lose her. She knew they had to find a way to save her life.

Miesha said she then saw her inhaler laying on the boat, and realized she was having an asthma attack. Bryan said he knew that his mom has asthma and COPD, but didn’t realize how bad her asthma really was. They tried to spray the inhaler a couple times into her mouth, but it wasn’t getting down into her lungs. Miesha then started using the inhaler herself, taking seven to ten puffs, and then blew as hard as she could into Chris’ mouth while Bryan held Chris’ nose.

Miesha said it was so hard to blow into Chris’ lungs because she had literally seized up “like a puffer fish.” She said she blew as hard as she could and suddenly there was a popping sound as if Chris’ throat had popped open, and as soon as Miesha released, Chris let out a huge exhale, so Miesha did it again. Bryan said he knew in that moment that it was working. Miesha said at that moment, they thought that Chris would be braindead because of how purple she had become. As they were riding back to the shore, they prayed.

Bryan and Miesha joined The Doctors on the show and said that although they fight for a living, it was still the scariest thing they’ve both ever gone through. The Doctors then welcomed Chris to come on out and join the show. Chris said she was pretty terrified when it happened and knew that she wouldn’t be there if it hadn’t been for Miesha. She said she was dying and Miesha saved her life. She said she thought it was amazing that Miesha thought to put the medication into her own mouth.

Miesha said she kept thinking that they were in the middle of the ocean in a third-world country. “There’s no help coming,” Miesha thought at the time.

The Doctors also welcomed to the show Dr. Rita Kachru, an allergist from the UCLA Medical Center, who explained that there were three main factors that contributed to Chris’s reaction. Number one was exercise, because she was swimming. Number two was the cold water, and number three was panic. Chris acknowledged that she had a panic attack.

The Doctors: What Happens In Asthma Attack

Dr. Kachru used a model to show what happens during an asthma attack. She showed how the airway is normally nice and open, but then said that due to the factors, the airway became completely closed, which is why she couldn’t breathe.

Dr. Kachru explained that what Miesha did was give what’s called positive pressure ventilation, which opened up her airways.