After all the earthquakes in California recently, The Doctors wanted to tell us what we needed to know about earthquakes. If you’re stuck inside during an earthquake, what do you do?  The best thing to do is to stay where you are as long as there’s no fixtures right overhead.

The Drs TV: Should You Stand In A Doorway During An Earthquake?

Dr. Rachael Ross said to stay out of doorways. Dr. Travis Stork said that some people say to stand in the doorway. The reason is that in old architecture, doorways were really strong. In new architecture, that’s not a good idea. Some also say to get under furniture. Dr. Travis said to be aware of how old your home is in order to determine whether it’s a good idea to stand in the doorway.

The Doctors: Should You Get Under Blankets? 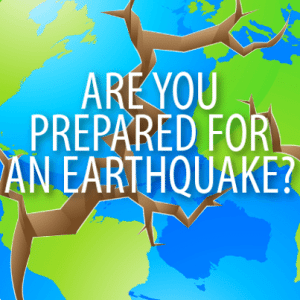 The Doctors talked about ways to prepare for earthquakes and to make sure you’re safe in the event of those disasters.

Dr. Andrew Ordon, with complete seriousness, said that people should get under blankets. No one questioned him on this. In fact, Dr. Ian Smith and Dr. Travis echoed these statements later. A doorway is unsafe but a blanket isn’t? I’m not sure I understand. I guess it protects you from breathing in dust.

Anyway, The Doctors sent everyone in their audience home with a 72-hour earthquake survival kit. It had a tent, food, water, blankets, ponchos, solar-powered flashlight, radio, and a USB device charger that doesn’t need batteries. It’s called the Quake Kare Emergency Preparedness Kit.

Then it was time for The Doctors News In 2:00. The first story on The Doctors’ radar was about a young theater employee who was fully vaccinated who had unwittingly transferred measles to four people, earning her the nickname Measles Mary. Two of the secondary patients had also been fully vaccinated. Measles Mary’s antibodies had lost their power to fight off measles. Recent outbreaks of measles have many concerned.

Rob Kardashian, the baby brother of Kim Kardashian, has checked into The Meadows, a rehab center in Arizona. Rob Kardashian has stayed out of the limelight while all of his siblings became extremely famous. Although The Meadows is most famous for treating substance abuse, it’s also known for its treatment of Post-Traumatic Stress Disorder.

The Doctors: Men Getting Postpartum Depression

A new study shows that men who are fathers after 25 and lived in the same home as their children were at risk for developing postpartum depression within the first five years of fatherhood. This study could lead to earlier intervention and treatment.