Whether on TV or in a magazine, there’s a good chance you’ve at least seen a photo of The Doctors’ special guest, supermodel Molly Sims. For Molly, her career began when she was just 21-years-old. She grew up in Murray, Kentucky and attended Vanderbilt. She wanted to be a lawyer and is very intrigued by crime dramas. Between her sophomore and junior year at Vanderbilt, she received an offer to go to New York. She went, saying she made no money and “suffered” because she got a lot of no’s, but eventually got a few yes’s. She believes that she was able to make great things happen from those few yes’s.

Molly fondly remembers her dad telling her that her assistant would be her boss, CEO, and more, which is why it was so incredibly important to be nice. She also believes it was important for her to be able to experience high school and prom, and even a little bit of college before making it as a supermodel. She reminds people “don’t not change.” One of Molly’s best and perhaps most famous saying is “It’s nice to be important, but it’s more important to be nice.” 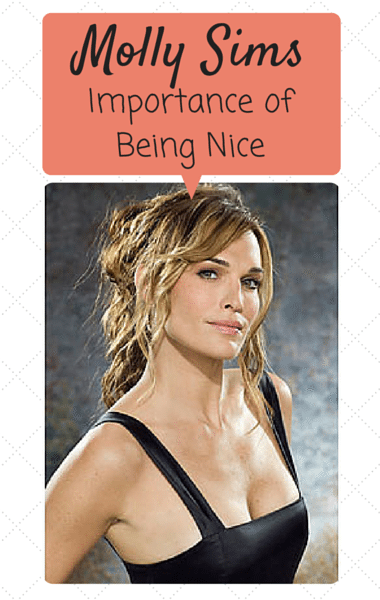 The Doctors sat down with supermodel Molly Sims, to learn more about how she began her career and why it was so important to simply be nice. ([email protected] / Flickr)

The Doctors: Inside Look At Identity Theft

On a different note, The Doctors shared that every two seconds, someone in the U.S. becomes a victim of identity theft. Con artists claim that people just make it way too easy. Melinda Young, the Economic Crimes Chair at the King County Prosecutor’s Office, shared that the average person will become the victim of identity theft at least once in their lifetime. Helen, an identity theft victim, explained that the woman who stole her identity created accounts in her name with a bunch of credit cards, causing her to become locked out of her own accounts.

The Doctors: How Thieves Steal Your Identity

“Alice” is a convicted identity thief, who took cameras with her as she gave an inside look at how identity thieves gain access to the personal information of their victims. When they entered a gym parking lot, she pointed out that people often put their wallets or purses in the trunk or glove box, while they go inside. Typically the gym will say there are cameras in the parking lot, when a lot of times they’re actually just fake or non-existent. One car window was rolled down just a couple inches and “Alice” pointed out that she could easily reach in and unlock the car, getting into whatever is in the car.

“Alice” also explained that out-of-state license plates are targets as well because tourists or visitors tend to travel with a lot of money. When driving by mailboxes, she noticed mail sticking out of the boxes, saying that she would easily grab a piece of mail knowing it could have some sort of personal information in it. Outgoing mail is also a target because it could contain bank account numbers. “Kevin” is another convicted identity thief who explained that the main thing people use victim’s credit for, is to buy things they know they can sell.

The Doctors: Protect Against Identity Theft

Doug Shadel, author of “Outsmarting the Scam Artist,” explained that identity theft can truly happen to anyone. Unfortunately, older people tend to be good targets because many still don’t have online access to credit cards and they tend to have better credit than younger people. Doug claimed that the trend right now is stealing someone’s identity and creating new credit using their name. He further explained that it’s actually more risky to not have online access to your credit cards, because if you wait for the statement at the end of the month, there’s too much that can happen in 30 days.

The other problem with not having online access, is that an identity thief could steal your identity and make their own online access, which means you then have a hard time proving you really are who you say you are. To protect yourself, have a locking mailbox, because you’d be surprised how many thieves target mailboxes. You also want to use a paper shredder to shred your bank statements. Also, avoid leaving things in your car, which includes the trunk. Online, make sure you have a passcode on your laptop and smartphone and consider using different passwords. If you have information on a flash drive, protect it with a passcode.