You may want to avoid getting too comfortable the next time you take public transportation. As comfortable as it may be to spread out, in San Francisco, the Bay Area Rapid Transit, or BART, may soon fine passengers as much as $500 for sprawling out. The act of spreading oneself out and taking up more room than necessary is commonly known as “manspreading.” First-time offenders could be fined $100, and the fine goes up by $100 with each offense up to $500.

Dr Jennifer Ashton argued that it should be more of a gender-neutral terms because both men and women are guilty of it. She pointed out that it also depends on how full the subway is, whether sprawling out is truly an issue. Dr Travis Stork, on the other hand, explained that because he has a 36-inch inseam, “the minute I walk on the subway, I’m manspreading. It’s hard to keep these things contained.” 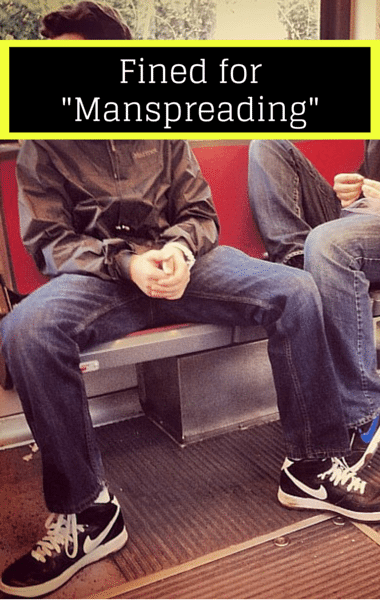 The Doctors discussed San Francisco subway riders who are now getting fined for taking up too much room, also known as “manspreading.” (dlytle / Flickr)

Dr Andrew Ordon countered that Dr Stork should stand and offer his seat to someone else instead, to which Dr Stork responded that he typically does. In New York, seat obstruction can cost a rider $50, so this fine isn’t exactly a new thing.

The Doctors: Surrogate Kept Couple’s Baby For Herself

Next, Dr Stork moved on to share the complicated story of a couple desperately trying to have another child. After struggling with infertility, the couple turned to a surrogate, but then nine months later when the baby was born, the couple wasn’t enough notified and the woman kept the baby for herself. Barbara and her husband David wanted a fourth child, so they turned to 22-year-old Jamie to be their surrogate. Jamie was happily married. The couple used Jamie’s egg to conceive a child, but by Jamie’s first trimester, Jamie and her husband separated. Soon after, Jamie stopped talking to David and Barbara, and didn’t even inform them when she went into labor.

Jamie kept the baby, whom she named Kaylee, and Barbara and David have been fighting for custody for the last seven years. They’re only allowed visits two weekends a month and have to pay $459 in child support. Fred Silberberg, a family law litigator who is currently representing Sofia Vergara in her embryo lawsuit, explained that Jamie is referred to as a traditional surrogate, which is different than how surrogacy is typically done today. She’s a traditional surrogate because her egg was used, which makes her the genetic and biological mother.

The couple should have instead used a donor egg or an adoption by the mother, but the surrogate would have had to provide consent. All of that should have been done before. Dr Ashton said you should always go about things with a legal and medical contract, even if you know and trust the person.

Speaking of children, there’s a photo being shared on social media of a popular leak-proof sippy cup that has locked in mold. One woman found that her son kept getting sick, and when she opened the mouthpiece, found a ton of mold buildup. The photo has led to more parents finding mold in their children’s Tommee Tippee sippy cups. Most parents will take the bottles apart entirely to clean them, but some may not know that that they need to.

The company issued a statement saying “The results [of testing] support that when used with recommended liquids (cold, light fluids including water and non-pulp juices) and cleaned in line with instructions, there are no problems. Difficulties have arisen though when liquids that are not recommended for use in the cups have been used, like thick formula, pulpy juice and warm liquids. We also recommend that cups are not left for long periods before being cleaned.”

Speaking of kids and drinking, there’s a new way that teens are attempting to get drunk. Shockingly, it involves hand sanitizer. Children and teens are ingesting the hand-cleaners because they contain between 45-95% alcohol. One bottle of hand sanitizer in some cases, can be the equivalent of five shots of hard liquor. It’s yet another thing parents need to be aware of, because hand sanitizers are available practically everywhere. As a parent, be careful about the amount of hand sanitizer you have available around the home.