Comedian Bill Engvall joined The Doctors, first sharing that the last time he was on the show it was around the time he had a kidney stone. He admitted that he had even more trouble than expected because he was told his urethra was really small. He had to undergo surgery to try to have the stone removed and was actually told that the doctor couldn’t even use a laser to blast the stone because his urethra was so small! To make it a little more humorous, Bill joked that the doctor asked him “Is this hereditary?” To which Bill responded, “I don’t know! Me and Pops never had that chat!”

Bill also admitted that his wife doesn’t find his comedian-style humor funny, but appreciates him much more when he’s just being himself. He also shared that his wife started going through “the change.” He said it likely wasn’t a good idea that they decided to build a house while she was going through menopause. Bill also pointed out that menopause has the words “men” and “pause” in it, which serves as a reminder that men should pause before they say something to a woman going through the change, because the symptom of irritability isn’t a strong enough description for what truly happens. 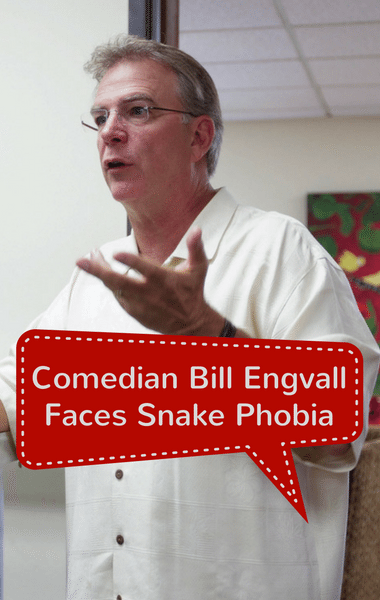 Phobia expert Gary Coxe was back to see if he could help comedian Bill Engvall overcome his extreme fear of snakes in just an hour. (lwpkommunikacio / Flickr)

On a different note, Dr Travis Stork wanted to discuss farting. Yes, you read that correctly. He explained that the Japanese created a product called the silent cushion, for all those people who have ever had to pass gas but for whatever reason held it in. The silent cushion claims to quiet 80% of the noise and has a carbon filter to block the smell. According to Dr Jennifer Berman, if you “spread your cheeks” that will take care of the noise, if you’re ever in a situation where you want to be quiet.

If you have a lot of gas, you can try eliminating certain high-fiber foods, by trying an elimination diet. Medically, passing gas is healthy and normal! The average person passes gas 14 times per day.

Bill is actually starring in an upcoming scary movie called The Neighbor which isn’t a slasher film, but is more of a murder/thriller movie. He then revealed that he’s terrified of snakes because they don’t have any legs but yet they can move. But his fear is actually a phobia and he even has a recurring nightmare involving snakes. That’s why they brought in phobia expert Gary Coxe to see if he could help Bill overcome his fear of snakes in under an hour. As scared as he was, Bill admitted he was ready to overcome his fear because it has been paralyzing him.

Incredibly Gary Coxe had yet another success story to share, as Bill walked out holding a snake in his hand. Bill learned that a snake will only bite when it’s feeling threatened, as Dr Travis Stork showed just how uncomfortable he clearly was, given that he wasn’t a fan of snakes himself. Bill even wrapped the snake around his neck, letting it slither under his shirt! Clearly, Gary knows what he’s talking about.

If there was one fear you would want Gary Coxe to help you get over, what would it be? For me, it’d easily be spiders!