The tragic thing about deaths caused by medical mistakes is that they are totally preventable. That’s why The Doctors put together some things we can watch out for to prevent mistakes in family care for ourselves or our loved ones. 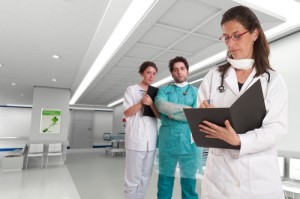 The Doctors discussed the regular meetings physicians hold to discuss what went wrong with patients.

To help tackle this topic, The Doctors invited CNN’s chief medical correspondent, Dr. Sanjay Gupta, to join them at the roundtable. You’ve probably seen him covering cable news around the world. He is a neurosurgeon and now an author of the novel Monday Mornings.

Dr. Gupta said that the book is inspired by the regular meetings doctors have to review cases and give each other advice and suggestions on avoiding mistakes and improving outcomes. These are known as M&Ms, for Mortality and Morbidity.

“There’s not always mistakes per se, like someone made an error of judgement. It’s that sometimes bad things just happen,” he said. “Things didn’t go the way you planned.”

Dr. Andrew Ordon explained that Morbidity in this case refers to any complications or unexplained circumstances surrounding a case. Dr. Gupta said it is true that medicine is a practice, and it’s based on trial and error.

This is Dr. Gupta’s first fiction book. “I just really wanted to give people something they’ve never seen before,” he said.

Dr. Travis said he thinks the book will resonate with a lot of people. He also reported that producer David E. Kelley, known for TV hits from Ally McBeal and Chicago Hope to Harry’s Law, is developing the book into a TV series.

He added that medicine should be more transparent and open to learning from their mistakes. Dr. Travis said the book would be eye opening for people who wonder what really goes on among doctors.

More than 200,000 people die in a single year due to medical mistakes, which is on the rise in recent years. The Doctors talked about reasons why this sad statistic could be growing.

Dr. Gupta said that we are more litigious these days, meaning there are a lot of lawsuits against doctors. He said this can cause doctors to perform more tests and procedures than necessary, to cover themselves.

But the more medical tests and procedures you’re doing, the more chances people have to make mistakes. Dr. Travis agreed that a complex array of prescriptions and procedures is just opening the door to more mistakes, simply by the numbers.

Dr. Andrew disagreed, saying he believes there are fewer mistakes, but more checks and balances to catch them. He admitted that in the old days, doctors would cover for each other and sweep things under the rug. But now there is more scrutiny and things can’t be covered up.

Have you heard of medical ID bracelets? These are good for people who have pre-existing conditions or allergies, because it can help doctors and nurses know about your medical history, even if you are unconscious when you arrive at the hospital.

Shop for a Medical ID Bracelet.

While medical alert bracelets have an important function, The Doctors expressed concern about the new trend of Medical Alert Tattoos. Sometimes I wonder if they are making these things up.

But apparently some people are getting tattoos of medical instructions put on their bodies. The Doctors agreed that it would be hard to know whether to take this seriously. Dr. Travis said that doctors are obligated to perform lifesaving measures unless there is signed paperwork on file indicating otherwise, which is why it’s important to work out a Living Will.

Dr. Travis modeled a USB medical necklace that can contain your updated medical information. Dr. Gupta said that it’s important for you to know your medications and history as well, so you can be responsible for knowing your own existing medical needs.