The Doctors kicked off their show by talking about a 16-year-old boy named David who was sucker punched and brutally attacked by classmates at his high school. A cell phone video taken of the event shows several students watching as David is punched to the ground and attacked. David now has metal plates under his eyes and has had reconstructive surgery. David and his father Daniel joined The Doctors over satellite. “It’s shocking. It’s devastating. It’s the last thing you’d expect when you send your son to school,” Daniel said of the attack. He said the first time he saw the video, he cried and he was physically shaking. 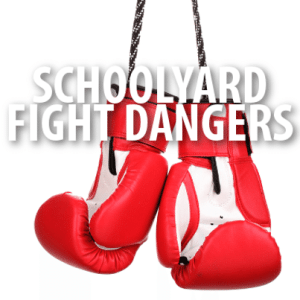 The Doctors talked about a boy who was horribly injured in a schoolyard fight and a new study that says that mean bosses are more effective.

Dr. Andrew Ordon described what happened. David was sucker punched with a right punch to the left side of his face. The punch shattered his cheekbone complex. They had to plate the cheekbone because his nose bones were separated from the rest of his face and he had an orbital rim fracture that caused his eye to be depressed.

Dr. Rachael added that she was proud of David to share his story and to be brave enough to go through the surgeries he had to go through. Dr. Jennifer Ashton added that there are long-term effects from the structural damage to his eye. Dr. Ordon said that David may have breathing problems through his nose and difficulty moving his eyes. He said that if David had gotten a blow directly from the front into the nose, the blow could’ve killed him.

The Doctors: What Did The School Do?

David’s school gave this statement: “The student who hit the other student is facing disciplinary action and has been charged criminally with battery. As a district, we take cases like this very seriously — whether the disruption is caused by students or or a threat comes from the outside. Situations like this are very rare at Parkview High School.” The statement came from Jorge Quintana, spokesperson for Gwinnett County Public Schools, the county where this happened. Dr. Travis reminded parents to teach their students not to fight. Criminal charges can be made against students in these situations.

A recent Michigan State University study says that bosses who are fair and strive to make their employees happy are more likely to suffer from fatigue, making them more likely to make mistakes and more likely to turn to deviant behavior, like theft. Dr. Travis said that if you’re a good boss, you can be nice and still have control of your employees. But if you’re not an effective boss and you’re trying to be nice, you’re going to get walked over. “It’s nice to be important, but it’s more important to be nice,” Dr. Travis Stork said.