The Chew crew pitted Mario Batali against Carla Hall in a Pantry Party challenge. Mario Batali created his recipe by using pasta sauce as filling for his Amatriciana Ravioli Recipe. Then Carla Hall made a simple Pork Loin recipe served with a warm bean salad. Check out both recipes and tell me which is your favorite. 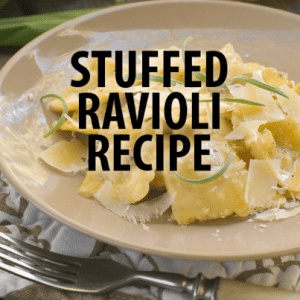 The Chew crew used leftover ingredients found in the pantry to make tasty meals, like Mario Batali’s Amatriciana Ravioli Recipe, with sauce on the inside.

The sauce here should be wet enough to ooze out, but dry enough that it won’t make a mess when it boils. Pecorino is a saltier cheese from the south of Italy, whereas Parmesan is more native to the northern and central regions of Italy.

As an alternative to wonton wrappers, use pasta dough cut into 3” squares.