Carla Hall and Daphne Oz started out the The Chew’s Thanksgiving meal by making a pan seared turkey with apple and cranberry chutney.

Hall said she made a brined turkey, which was the best way to get a lot of flavor into the turkey. She also said this a great dish for people with limited space in the refrigerator. Breaking the turkey into pieces is going to free up a lot of room. It is also going to save some money from leaving your pocket as well, costing only $2.85 a serving.

Get the recipe for the pan seared turkey and the apple and cranberry chutney below.

For the Cranberry Apple Chutney:

Instructions
For the Turkey: 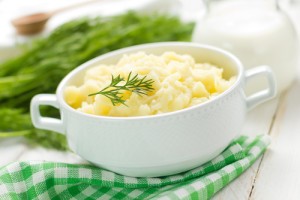 For the Cranberry Apple Chutney:

Mario Batali handled the first side dish as Hall and Oz finished up the pan seared turkey. He decided to make a garlic mashed potato recipe with a lot of olive oil to replace the butter.

Batali reccomeneded using Yukon Gold potatoes because he said they are delicious and will work well for this recipe.

Get the recipe for the garlic mashed potatoes below. And with a cost of only $.70 a serving, this is dish worth making for Thanksgiving.