Brooke Shields stopped by The Chew today and she was looking lovely but normally she wouldn’t want to dress up. She told The Chew she hates dressing up and she would much rather be dressed down all day. She said she was thankful to be on Army Wives because she gets to wear a flight suit all day that is so easy to put on all she has to do is strap some Velcro around her.

Brooke Shields Lets Her Husband Do the Cooking

Brooke Shields said she doesn’t normally cook at home. She leaves all the cooking to her husband although her daughters always try to make her feel better when she does cook food on the random occasion.

“He even grinds his own meat,” said Mario Batali who is friends with her husband.

Mario Batali wanted to know which show Shields had worked on that had the best catered food. She couldn’t think of an answer for a minute but when she finally thought of one she said it had to be the risotto she ate on Endless Love when she was 16-years-old.

She also remembered eating salad for breakfast with her mother when they lived in Paris for a time.

Brooke Shields is making her directorial debut this summer when she makes her directorial debut as the director of Chicago. The play is very close to her heart she said. She has acted in numerous renditions of the play, once in London and again on Broadway, and said she is honored to be asked to direct the play.

Brooke Shields Loves Broadway But TV is Her Home

Brooke Shields has worked in a lot of different mediums and said her favorite medium is working on Broadway. Even though she said it is the hardest job in the world, it is the most gratifying feeling to watch those curtains go down and know you did the best job you possible could.

But TV is her true passion, saying, “It has been home for me.” 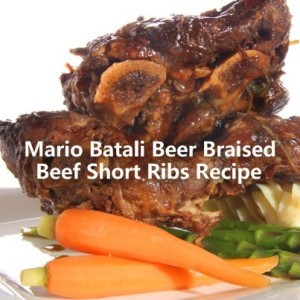 The Chew May 2 2013 invited Brooke Shields on the show to help them cook up a beer braised beef short rib recipe and a michelada drink recipe.

For the Beef Short Ribs:

For the Snow Pea Salad:

For the Beef Short Ribs:
For the Snow Pea Salad: