Actor Goran Visnjic can be seen in the ABC drama Red Widow. He was in The Chew kitchen this week to help out with an easy weeknight dessert that takes almost no time to prepare. This is a Flourless Hazelnut Chocolate Cake Recipe. Also, read on for tips on how to juice a lemon, peel a hard-boiled egg, or frost a cupcake.

He recalled eating quick meals such as polenta with milk. Visnjic admitted that he does not do much cooking for himself, but he was eager to learn. I doubt you can simplify dessert much more than Carla and Daphne did with this recipe.

If you want to see Visnjic in his natural element, you can watch him Sunday nights on ABC’s Red Widow. The former TV doctor has been approached for veterinary advice on the street. These days, his character is a Russian mob boss. 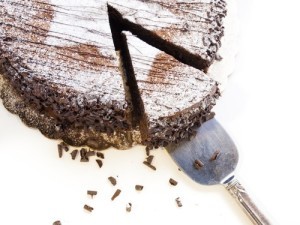 Goran Visnjic was a guest on The Chew to learn how to make a Flourless Hazelnut Chocolate Cake Recipe. The Chew crew also explained how to juice a lemon.

The Chew: How To Peel A Hard-Boiled Egg

What’s the best way to peel a hard-boiled egg? Michael Symon explained that you can use a splash of vinegar in the water while you are boiling. Then rest the eggs in an ice bath and tap it on the top and bottom to crack it easily.

The Chew: How To Juice A Lemon

Daphne Oz explained that you can easily juice a lemon by slicing it it half. Then take a fork and use it to wiggle the fruit’s flesh back and forth, extracting the most juice possible.

The Chew: How To Ice Cupcakes

You can use a pastry bag (or improvise with a gallon-size plastic bag) to frost or ice cupcakes. Twist it with your non-dominant hand. Use your dominant hand to guide the tip or corner of the bag to perfectly frost a cupcake from the outside in.