On The Chew May 31 2013, Stephanie March co-hosted and talked about the most attractive professions for men, right before they went into loads of delicious Mexican recipes, such as an affordable plantain beef hash, guacamole with pistachios and radishes, and baja-style chicken thighs.

The Chew: Most Attractive Professions For Men & Stephanie March 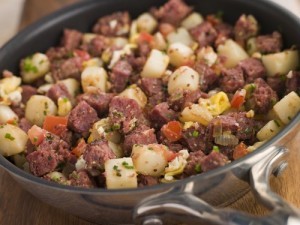 Stephanie March, whom you might know from her role on Law And Order and her marriage to Iron Chef Bobby Flay, co-hosted the show today. Before they got cooking, they talked about how she met Bobby Flay, the five most attractive professions for men, and finally they quizzed Michael Symon on how much he knew about the women in his life.

The Chew: Most Attractive Professions For Men & Stephanie March

Three Chew viewers were brought on the show today to show us their best home-brewed Mexican recipes. These recipes included plantain beef hash, shrimp tacos with pineapple salsa, and chicken and vegetable quesadilla with guacamole. Since the plantain with beef hash was made by a native Costa Rican, she won the contest and showed us how she makes her prized (and affordable) Mexican dish.

Daphne Oz and Stephanie March are great hosts, and they shared some of their knowledge by giving us some girl’s night recipe ideas. These included Daphne Oz’s guacamole with pistachios and radishes recipe, her chili-lime mango snack recipe, and Stephanie March’s margarita spritzer recipe.

Chef Marcela Valladolid from Food Network’s Mexican Made Easy came on the show to cook up her baja style braised chicken thighs recipe along with some arroz rojo.