The View has a great episode July 3, 2014, focusing on people famous from the web. Ross Mathews is returning as guest co-host in a show that includes “Kid President” Robby Novak, internet prankster Jack Vale, the Singing Janitor, and a 17-year-old Michael Jackson impersonator. Plus, tips to create unique hairstyles for girls. 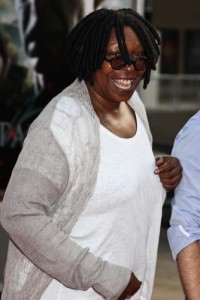 Whoopi Goldberg and the rest of the ladies of The View will be talking to a number of internet stars, including Kid President Robby Novak, the Singing Janitor, and internet prankster Jack Vale. (Miro Vrlik Photography / Shutterstock.com)

Ross Mathews will come by The View again to guest co-host another time. I’m becoming a real fan of him as a guest co-host. We’ll have to see how he does July 3, 2014!

If you’ve never heard of Kid President Robby Novak, I have two things to say to you: 1) Have you been living under a rock? and 2) Go immediately to check him out. The Kid President is both inspiring and hilarious and went so viral even the real president wanted to meet him. Now, he’s coming by The View on July 3, 2014.

Jack Vale is an internet prankster who has done a number of great pranks, including blowing bubbles at strangers when they’re not looking and pretending to be just as surprised by them as the stranger and walking around with a fart-making device and pretending to fart on people. He’s great. Check him out on The View!

The Singing Janitor is an incredibly talented custodian that makes videos of himself singing classic songs with his smartphone in and around the building that he cleans. You won’t want to miss this talented man. He’s about to be big, I think.

The View: Unique Hairstyles For Girls

Rounding out the show, The View will also have some great unique hairstyles for girls on the show July 3, 2014. It’s an action-packed episode. You won’t want to miss it!