The Chew May 14 2013 is all about desserts with a Michael Symon’s chocolate caramel peanut bars with buttered popcorn gelato recipe, Clinton Kelly’s carrot cake recipe, Mario Batali’s strawberry shortcake recipe and Carla Hall’s triple orange cake recipe. Then, viewers will be shown a clip from the conclusion of The Chew co-hosts’ two part cameo on General Hospital. 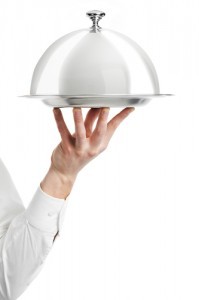 On a Chew dedicated to everyone’s favorite meal, there will be a strawberry shortcake recipe and a few others.

That is a really long name for a dessert. Hopefully, Michael Symon will come up with a shorter name for this because when I finally find someone to make it for me, I will have to be asking for chocolate caramel peanut bars with buttered popcorn gelato. I am one for really strange flavors. I’m one of the two people that liked Pepsi Blue back in the day. I also loved those Hershey S’mores bars that you can’t find anywhere (my offer for anyone who has one is $100). This new creation, featuring some of my favorite flavors, will be interesting to see play out. I can’t imagine peanut butter ever playing nice with buttered popcorn in gelato form, but I want to see Symon convince me otherwise. The carrot cake recipe, strawberry shortcake recipe and the triple orange cake recipe are all welcomed, as well.

So it looks like the cast of The Chew didn’t have just one appearance on General Hospital. After seeing it on the May 13 2013 show, I got a better idea of how it played out, but I still have absolutely no idea what writer decided to pencil the cast of The Chew into a daytime soap opera. What scandals could possibly go down on a cooking show? Maybe I’m better off just shrugging and walking away from this one.