On The Chew June 12 2013, Carla Hall will be taking on her former “Top Chef” Quickfire Challenge by making Hush Puppies once again, Michael Symon is taking over Clinton Kelly’s Craft Corner, and Mario will be making a frittata and zucchini fritter recipe from the contents of a mystery fridge. 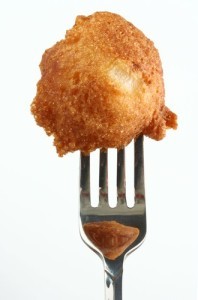 Carla Hall will be revisiting her Iron Chef days with her hush puppies recipe.

Hush puppies are a starch-based food that is made from cornmeal batter. They are generally shaped in balls or other oblong shapes, and are generally served as side dishes at seafood restaurants. Ingredients that generally appear in a hush puppies recipe are wheat flour, eggs, milk or buttermilk, cornmeal,  salt, baking soda, and water. Optional ingredients that are sometimes thrown in to mix things up are include whole kernel corn, onion, garlic, spring onion,  and peppers. In certain cases, pancake batter can be used.

Hush puppies are also big in the Caribbean, where they are made just a little differently. Though the ingredients are very similar, they include sugar and are rolled in the form of a hot dog. This makes for a sweeter food that is almost like a desert, and is often served with jerked meats like chicken or pork.

Frittata is an egg-based dish similar to an omelette that is flavored with ingredients such as cheeses, meats, pasta, or vegetables. Sometimes, they are also flavored with herbs. Middle Eastern dishes such as Eggah and Kuku bear a strong resemblance to frittata, except that they use a smaller portion of eggs to bind together a larger amount of ingredients and tend to have more spices instead of cheese.