The Chew is going to be celebrating the most important meal of the day on March 25 2013. They are going to be showing you some great meals you can serve up for breakfast that are going to be delicious, inexpensive and easy to make. This Blockbuster Breakfast hour is going to make you regret skipping breakfast.

The Chew: UK Banning Sugary Cereal & What Do Your Eggs Say About You? 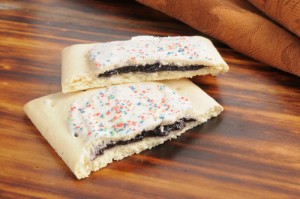 The Chew March 25 2013 is going to have an hour-long show packed with breakfast recipes, and Michael Symon will find out how Toaster Tarts are made.

Mario Batali is going to have the Dish of the Day on March 25 2013, and he is going to be cooking up a chorizo and manchego strata. Manchego is a type of cheese made from the milk of sheep and it is most often eaten in Spain. He is going to be adding it as one of his main ingredients in the casserole, also known as a strata, he is making on the show.

Does this sound like a recipe you would try making at home?

The Chew: Evette Rios Visits the Home Of Egg Benedict

The Chew is sending their food correspondent Evette Rios to check out Delmonico’s in New York City, the original home of the classic eggs benedict. You can’t have a breakfast show without some eggs benedict, right?

Michael Symon is going to be explaining Toaster Tarts to everyone on the show in the segment called “How’d They Do That?” I guess it could be intriguing to find out how they get the jelly flavoring inside the tart while keeping the outside from getting soggy.

Make sure to tune in to The Chew March 25 2013 to get some great breakfast recipes from the Chew crew. If you miss any part of this breakfast-themed show, stop by Recapo for a complete recap of the show, including all the recipes.