On The Chew June 11 2013, Michael Symon will be whipping up a BBQ chicken recipe, Traci Des Jardins, a James Beard Award-winning restaurateur and chef, is making a grilled pork chops with cherry almond salsa recipe, Daphne Oz will tell us all the secrets about her grilled veggie salad, and Carla Hall is bringing up the rear with her minted watermelon and cucumber punch recipe. 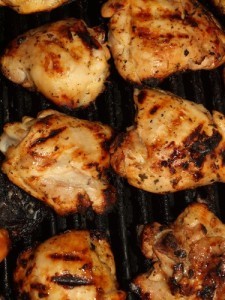 Michael Symon will be showing us his BBQ chicken recipe and what true barbecuing really is.

Believe it or not, a BBQ chicken recipe is not as simple as throwing BBQ sauce on a hunk of chicken and calling it a day. There is a proper way to execute a BBQ chicken recipe. One of the biggest things that stops people from really knowing what BBQ chicken really is comes from the common misconception that BBQ is a synonym for “grilled” or “grill” or food stuffs that are just being topped with BBQ sauce. It’s actually quite a bit differnt than that.

For those in the know about BBQ-style cooking, it comes not necessarily from a grill or a sauce, but the practice of slow cooking meats with woodsmoke indirect heat to turn what was once a pauper’s cut into a delicious entree. Cooking something quickly on the grill is not barbecuing – it is grilling.

As you can probably guess after hearing this, many purported “BBQ Chicken” recipes don’t really follow the rules of barbecuing at all. To achieve chicken that can truly be labeled as “barbecue,” the meat should never see high heat, should be cooked at 300 degrees on a grill that is half hot and half cool, and the dry rub is imperative to getting it all right.

Do your BBQ chicken recipes follow this pattern properly? What do you think Michael Symon will bring to the table? Let us know in the comments below!