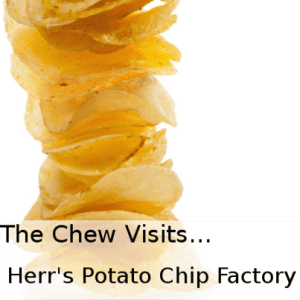 In 1946, Ed Herr’s father, James S. Herr, bought a small company and started making his own potato chips by hand. He and his future wife would sell their potato chips in downtown Lancaster on their dates. James Herr picked a good time to start a potato chip company because this was a time in American history where they were watching a lot of television and wanted some snack food to go along with it. With timing like that, the company inevitably grew into what it is today: an operation that is now churning out five to six tons of chips every hour.

Behind Every Potato Chip Is a Stronger Potato

How Potato Chips Are Made

The potatoes are automatically sliced in a machine, which leaves a cold and wet potato slice. To turn that slimy, pale potato into a delightful one, they are dumped into hot oil that is held at 320 degrees. After the chips come out of the fryer, they are salted and you are left with a great snack!

After the cooking process, the chips are salted and flavored with one of Herr’s many varieties.

Why Herr’s Potato Chips Are Better

What sets Herr’s Potato Chips a step above the competition is their attention to detail. Each potato chip is put underneath a camera after the frying process, and any chips on camera that are viewed as unsatisfactory are shot off the assembly line with a blast of air.