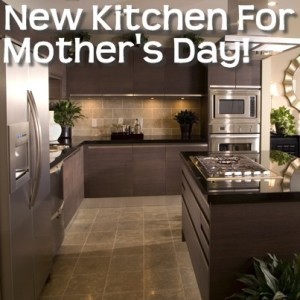 Laurie got a surprise kitchen makeover for Mother’s Day.

Laurie and her husband Bill love children. Not only have they had five of their own, they have also had 26 foster children come through their home over the years as well. Bill says that they have always wanted to give back, and being able to help out so many children and touch their lives they think will make a big difference.

Before she revealed Laurie’s big Mother’s Day surprise, Carla took a tour of her kitchen. All sorts of people from their family and the community have come through it over the years, and to say it has gotten a little beat up would be an understatement. Missing cabinet doors, a long-outdated set of kitchen appliances and a very small kitchen table were just a few of the problems Laurie’s kitchen had. Thankfully, Carla came in and saved the day.

It was a lot of work, but The Chew crew not only spruced up Laurie’s kitchen, they made it totally new. The floors and counter tops were torn up, the appliances were replaced and the kitchen was opened up to allow room for the large crowds that come through her kitchen. Laurie’s Mother’s Day gift wasn’t left unappreciated, she was brought to tears.

Her new fridge can hold over 30 bags of groceries, her table can seat 12 and with all of the laundry she does, Laurie got a new high-efficiency washing machine and dryer.