Did you know the average American family spends about $145 for everything for Easter, from the decorations to the food to the candy to the apparel? The Chew March 22 2013 was an episode that will show you how to have a fabulous Easter for only $5 a person. Mario Batali said for his Easter dinner he is going to be doing a Northern Italian inspired dinner while Michael Symon said his family is doing a traditional Greek Easter which is actually celebrated later than traditional Easter. Symon said he loves having a Greek Easter because as a kid he got to have two Easters.

Daphne Oz said every Easter her family goes to church, then they have an egg hunt, they eat dinner and then the Oz family football game starts. Oz said she is is too old to participate in the Easter egg hunt but she doesn’t seem to a have problem tackling her little cousins when she plays football. 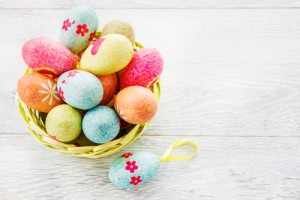 The Chew looked at Easter traditions from around the world, went over their plans for this Easter and looked at how a study related jelly beans to personality.

As for Carla Hall and Clinton Kelly, they just wanted to know if there is a black Easter bunny after finding out about black Santa this past Christmas.

The Chew: Easter Traditions Around the World

If you think our Easter traditions are silly (we do have a rabbit that delivers chocolate eggs), then keep reading to find out about how some countries around the world celebrate Easter.

A new study has revealed jelly beans can actually be a clue into someone’s personality. The study done by Education World surveyed thousands of people about their personalities and their favorite jelly beans and found some correlations. See how each color jelly bean matches up with the personality of a Chew co-host.