Clinton Kelly presided over a food court in his Judge Foodie segment. Do you know the rules of double dipping etiquette? Plus, check out Carla Hall’s best dip tips for parties and entertaining. 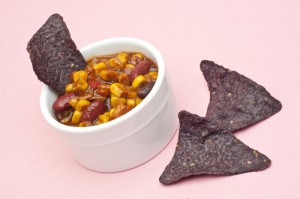 The Chew’s Judge Foodie segment weighed in on the etiquette of various dip-related entertaining situations, including advice on double dipping etiquette.

What are your thoughts about double dipping? One woman admitted to her habit, and said that as the cook, she should have the right to enjoy dip however she likes it.

The woman admitted that she would double dip, even when socializing with strangers. “It’s OK to double dip if it’s just you and the person you are currently sleeping with,” Clinton advised. “If you are with your closest family and friends, it’s OK to flip the chip.”

But according to Clinton, you should only single-dip when entertaining guests you do not know well.

The next defendant was accused of passing off store-bought guacamole as homemade. She said that she garnishes it with spinach or parsley instead of cilantro.

Even worse, the woman claims her store-bought dip as a family recipe. That is over the line, according to Clinton. You should not claim that you made something if you are called on the carpet.

Two friends had a dispute over the quality of a dip. One friend said that her dip of fat-free cream cheese, no-bean canned chili, and cheddar cheese, baked in the oven, is delicious.

But her friend thinks the dip tastes gross. She said she does not like heated cream cheese, and the dip becomes gross as it sits out for awhile. Clinton tried the dip for himself and compared it to drive-thru fare.

His ruling was that the dip was gross. Do you have a favorite dip? Would you submit it for consideration on national TV?

What do you need to know if you are preparing a party dip? Here were Carla Hall’s words of advice.

One exception is a combination of salt and vinegar chips with onion dip.