Good Morning America’s Lara Spencer came by The Chew to talk about her new book Flea Market Fabulous. She just got back from hosting the Miss America pageant and she said it was an awesome experience. This year, she brought her nine-year-old daughter and she said it was great to see it through her eyes.

She also said that she always roots for the girls with the most obscure talents. Some of the talents included ventriloquism and clogging. Lara Spencer said it was weird to announce the girl who was clogging to “I’ve Had The Time of My Life“. 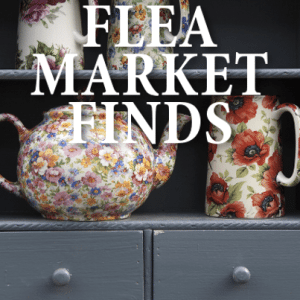 Lara Spencer came by to talk to The Chew crew about her new book Flea Market Fabulous as well as what it was like to host the Miss America Pageant. (Elena Rostunova / Shutterstock.com)

Lara Spencer said that she’s been going to flea markets since she was a baby. She said when she was young, there wasn’t a budget for decor and her mom had to be thrifty. Her mom was able to create a beautiful home by going to flea markets and rescuing and reinventing old things. Lara said that the treasure hunts really makes her happy.

Carla Hall wondered what her attic looks like because Carla always buys a bunch of junk thinking it’ll turn into something great, but she never does anything with it. Lara said she’d come over to help. Mario Batali suggested Carla read Lara’s book.

Lara said that her book was all about helping people to transform their finds into something wonderful by painting or sanding or stripping and making it anew. Then Lara Spencer said she hates stripping, but her mom can do it.

The audience laughed and Lara looked right at the camera and shrugged. Then she high fived Clinton.

Lara Spencer had a kit for flea marketing that she called her “fleamergency” kit. Lara said she goes so early in the morning that it’s still dark out when she goes. She said that’s when the real dealers go. Lara goes when the people are still unpacking things.

Her kit has a big tote bag and a rolling cart to help carry things. She also brings newspaper and bubble wrap. Her kit includes a notebook with measurements for paintings she has. She said she’s always looking for old frames because frames can be expensive new, but flea market frames can be very inexpensive. She also brings tear sheets from magazines to help her remember what her style is or how she wants to do a room. She said you should identify common factors in the room like a color or a theme. Finally, she recommended baby wipes because serious flea marketing can get dirty.

Several people at the tasting table from the audience brought finds from home and Lara Spencer had to tell them whether to use it or lose it. The first audience member had an antique wall lamp fixture. Lara said to keep it, but that she should get it rewired because old wirings can be faulty.

The next audience member brought a weird little statue she bought in South America. Her boyfriend said she should get rid of it (and I agree, because it was really weird looking) but she wanted to keep it. Lara Spencer said she should keep it and revamp it. Lara suggested turning it into a base for a lamp, so it’s well lit. I’m not sure the little monster statue needed lighting. It was pretty scary already. But the audience member was touched.

Everyone in the audience got a copy of Lara’s book.