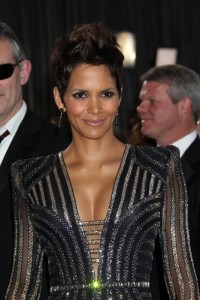 On March 15 2013, Halle Berry and Morris Chestnut talk to Steve Harvey about The Call, love and life. (Helga Esteb / Shutterstock.com)

On March 15 2013, Steve Harvey is back with all-new episodes. He’s talking to Halle Berry and Morris Chestnut about their new film, The Call. Steve has a new “Harvey’s Heroes,” two kids that are saving endangered animals around the world. He also figures out what age is right for teens to start dating.

In The Call, Halle Berry plays a 911 operator that tries to solve a series of murders. She receives calls from the victims as the killer is tracking them or has them locked in a car trunk. The thriller is now in theaters.

Halle and her co-star Morris Chestnut talk to Steve about love and life. They go head-to-head in a game of putt-putt golf. Halle helps Steve gives an audience member an emotional surprise.

Carter and Olivia founded One More Generation, OMG, while in elementary school. They are passionate about animals and adopt cheetahs in South Africa to help the species thrive. Steve rewards their heroism and passion with money and a special trip. The kids say that anyone can make a difference, either by collecting money to help one animal or by starting something like OMG.

A dad comes to Steve about his 14-year-old daughter. She wants to start dating, but is she too young? Steve tells him that he could start with supervised group dates. He can keep tabs on the boys and girls by inviting them over to his home.

The next level of dating is getting to know the person his daughter in interested in. He should talk to the kid and his parents. As they earn your trust, let them go on a hangout at the mall or movie theater with a specific pick up time. Over time, your kids will learn boundaries and earn your respect and trust. Steve’s tips end with curfews as the child gets older. There should also be consequences if curfews are broken.