On April 17 2013, Rachael Ray has an episode full of tips. Stylists are showing how to look thinner just by changing your hairstyle. Then Josh Capon has two five minute meals and an ingredient challenge in Rachael’s fridge. Also, Rachael’s food stylists show us how to bring your homemade BBQ sauce with you to picnics and cookouts this summer. 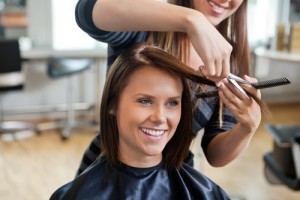 On April 17 2013, Rachael shows us how to take BBQ to-go and a viewer gets a Rachael Ray inspired makeover.

There are simple style tricks to help you lose ten pound fast. You can change up your bra, pick a different fit of jeans and try different shape wears. There are also haircuts you can try to look thinner. Sometimes, just getting a couple of inches cut off or angling can give you a thinner look.

Stylist Ted Gibson stops by this episode and shows a viewer how to flatter a round face. He believes that Rachael’s hair is the perfect inspiration. Her angled bangs, known as the “bangle,” will flatter a rounder face.

Also on this episode, Rachael challenges chef Josh Capon to a fridge frenzy. He has five minutes to make a meal with whatever Rachael has in her fridge. In Rachael’s fridge: veal scaloppini, Genoa salami, Gruyere cheese, green and yellow zucchini and various herbs. Rachael will reveal what chef Josh makes on April 17.

He’s also putting together two other five minute meals. Simple and fast, the rules that chef Josh lives by.

Rachael’s food stylists know how to dress up any meal. They’ve shown us fast salsa and on this episode we learn how to take homemade food to-go. They are showing you how to take homemade BBQ sauce to your picnics and cookouts this summer. Who know there was a wrong way to package sauces?