Oprah is excited to honor Military Spouse of the Year nominees by making them the audience for her Favorite Things 2012 special. But when she set up the surprise, she realized that some of the gifts might accidentally be visible to the audience. She was not happy about it, but that didn’t stop her from giving away the Jetson Electric Bike, the Tusk Capri Clutch Wallet, and more.

I didn’t see what she was talking about while she was out on the set, but you definitely don’t want to give away the surprise. In the audience, the military spouses started watching the screening of the OWN reality show Married to the Army: Alaska. 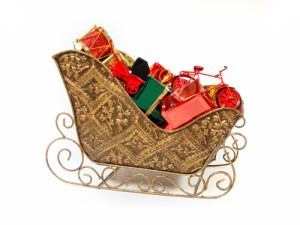 Backstage, Oprah changed clothes into a sparkly red top and blue jeans. The series sounds compelling, and the spouses were hanging on every word. Then, just according to the team’s plan, the show was interrupted by static.

The audience wasn’t sure what to do. Oprah was waiting outside. Back in the control room, the production team was waiting for the spouses to react. That’s when the jingle bells started, and Oprah burst into the room, bellowing, “It’s my favorite things!”

The curtains rolled away, revealing elaborately decorated Christmas trees, holiday lights, and gifts galore. That’s when the audience members truly freaked out. There were hugs, screams, tears, and confused smiles. Oprah’s elves started bringing the gifts out as everyone processed the shocking ruse.

“There’s nobody in the world more deserving of a day like you’re about to have than you all. The work and the sacrifice and the love and the care, and the vision that you hold…for every life that you touch,” Oprah said was the reason for these special surprises and rewards.

Oprah explained the rules for this special surprise show. Even though each of the gifts on the stage had a name on it, everyone in the room would get to take each of the show’s gifts home.

Nicole opened the first gift, Gemvara Gemstone Earrings, which are worth about $1,000 and can be customized according to your birthstone.

The next gifts were some of the same ones we saw Oprah picking out earlier in the special show.

Oprah said the next gift was one of her favorites of the year (but aren’t they all? They’re her favorite things!) The Tusk Capri Clutch Wallet has space for a smartphone and many other essentials, so you don’t have to carry a big bag if you don’t want to.

Oprah invited her best friend Gayle King to come out from backstage with the next gift. Gayle said that it was really fun watching the audience reactions to Oprah’s surprise. Gayle made herself at home to watch the rest of the fun out on the set with Oprah.

Rebecca opened the next gift, which was chosen for her because she loves to keep photos of her family around the house. The Reed & Barton Picture Frames cost between $25 and $50.

Oprah said if you’re giving someone the gift of a picture frame, you should put a special and personalized photo in the frame.

Jeremy, the sole husband in the audience, got to open the next gift, because it was not “too girly,” according to Oprah. Inside was Giro Sport Design Reverb Cycling Helmet, a $60 value.

To go along with the bike helmet, O Magazine’s Adam Glassman rode out on the Jetson Bike electric bike, worth about $1800.

Oprah is rich, and she said she ordered the bike in several different colors, but the spouses each got to pick their own.