The hunt for Oprah’s Favorite Things 2012 is on, and Oprah herself actually went shopping at stores including Macy’s to find this year’s gifts. So far she has mentioned Pipcorn Popcorn and Tom Ford Lipstick, among other finalists. Next up were visits with designer Michael Kors and Oprah’s Tory Burch Michelle Tote review.

Next it was time to meet Tory Burch herself at Madison Avenue’s new Tory Burch store. Oprah reminded everyone that nothing makes the list unless she approves it and it’s something she would buy herself. 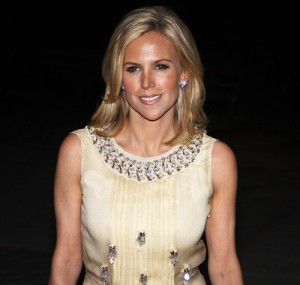 O Magazine creative director Adam Glassman was along for the ride. Tory Burch thanked Oprah for playing a part in her success by featuring Tory’s designs on a previous Favorite Things show. Adam confessed that he has trouble keeping Oprah on task. They chose a pink Tory Burch Michelle Tote from among the boutique items.

Elsewhere in New York City, Oprah and Adam visited the Michael Kors store and met with the designer himself. Michael said that someone recently called his store “a very glamourous Duane Reade.”

She picked out the sparkly Michael Kors Glam Studded High Tops from among the vast array in his store. But Adam reminded her that there were still many more items to choose from for the final list.

Meanwhile, the TV production team of Jill, Lindsay, and Jon were figuring out how to surprise deserving military spouses whose husbands and wives have been serving the country. They plotted to host the surprise show at the Military Barracks Headquarters in Washington, D.C.

The goal was to choose 30 deserving audience members, and Oprah’s production team worked with Military Spouse Magazine to track down some deserving candidates. Among them was Jeremy, who has a special needs son and is an advocate for children with disabilities. His wife had been deployed three times.

Another candidate, Nicki Bunting, lost her husband in Afghanistan. She learned she was pregnant with their second child just after her husband died. Nicki created Bubba’s Belly Run to help other military spouses who lose their loved ones at war.

Then there was Karen, who was nominated by a Marine who lost both of his legs. The producers were emotional about the candidates who have done so much to help the people around them. They knew that Oprah would love to meet these special people.

Back in New York City, O Magazine’s Adam Glassman wanted to Skype with Oprah to go over some more items to be featured in the magazine and given away to the spouses. He took a moment to let his team breathe and meditate before getting back to work. How Oprah of him.

Oprah took a moment out of a photo shoot to Skype with Adam and discuss some more options for her Favorite Things 2012 list. What do you think Oprah’s Skype name is? The team still needed to pick 30 more items. Among the options was a box of fruit, some diffusers that Oprah hated, and an Inner Peace spray.

Edward Bess Perfume featured an exclusive bottle design just for Oprah. A Ralph Lauren blue label cable V-neck sweater got the thumbs up. Schmidt Brothers Cutlery put together a knife set that Oprah seemed to like.

Adam brought up Pipcorn popcorn once again, but she was iffy on some of the flavor options; she wanted Lemon Truffle Pipcorn, because she loves truffles and being bossy.

There were still many more items needed to round out the list. What would you put on Oprah’s favorite things list if you could Skype her a suggestion?