Oprah’s Favorite Things 2012 kicked off in a big way with Oprah’s opinions on everything from a Tempurpedic mattress to Tom Ford lipstick. She even went shopping…just like normal people might, but with more money. Next, she visited Macy’s for Movado watch reviews and sent Gayle to a food festival to find Pipcorn White Truffle popcorn.

To help put together Oprah’s Favorite Things 2012, the TV mogul actually had to go to a store. “I haven’t been in one in such a long time,” she admitted excitedly. I’m amazed they didn’t shut down the Macy’s in New York City just for her. “I can’t tell you the last time I went shopping,” she admitted. 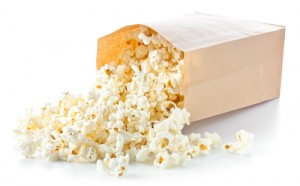 Oprah loved the Jessica Simpson shoes, which are a staple of O Magazine. I can’t tell if the Macy’s employees were more excited about the shoes or Oprah’s presence. She found a particularly sparkly pair that evoked The Wizard of Oz. She insisted that her shoe choice needed to come in five different varieties.

Adam Glassman, the magazine’s creative director, also pitched Movado Watches, which Oprah preferred in white. Oprah got to ride the wooden escalator, an iconic set piece of this Macy’s location.

Since Oprah likes giving gifts in full sets, they needed to find sheets for her Tempurpedic mattress. They also looked at white sheets, and Oprah declared that “bedding makes me happy.”

If you watched Oprah’s reality show, Season 25: Oprah Behind the Scenes, you’ll recognize familiar faces from her team of producers, who were hard at work on this Favorite Things 2012 show. OWN president Sheri Salata called Adam at the magazine.

Also in her office were producer Lindsay, executive Jon, and producer Jill. Sheri told Adam that Oprah wanted the audience giveaway to go to military families. It’s amazing how many people are involved in putting these shows and giveaways together.

Next, Oprah’s best friend Gayle King went with O Magazine’s Adam Glassman to Williamsburg, Brooklyn, to try some artisanal foods at the Smorgasbord Food Festival that could be contenders for Oprah’s 2012 Favorite Things list.

Pipcorn came in flavors including White Truffle popcorn, which sounds like Oprah bait to me. Jeff and Jen Martin are the founders of Pipcorn, who explained that their popcorn has a more delicate hull than typical popcorn.

Gayle has a problem with eating in moderation, so Adam kept nagging her to stop chowing down on everything in sight. By the end of the day, she said she couldn’t take one more bite.

With many more choices to go, it looked like Adam and Oprah had to work on the list via Skype to get it done in time.