Home > Meredith Vieira
When you buy through our links, we may earn an affiliate commission. As an Amazon Associate we earn from qualifying purchases. Learn more.

Meredith Vieira kicked off the very first episode of her new daytime talk show by introducing the other people that will be around for the show, including her friend John Harris and her band leader Everett Bradley and the band MVPs. Everett Bradley tours with Bruce Springsteen and the E-Street Band regularly.

Meredith Vieira: Why This Show? 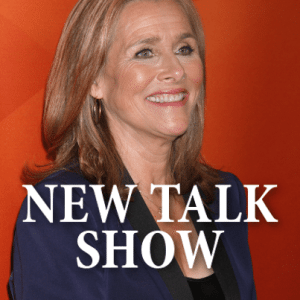 Meredith Vieira kicked off her new talk show with a surprise from Broadway, including an appearance by Peter Gallagher and the Rockettes. (Helga Esteb / Shutterstock.com)

“Daytime television has this unique ability to connect with people on a very personal level,” she said. “It is a privilege to have this show and I don’t take it for granted at all.”

She said this show is a combination of what she’s been doing in her 40-year career. She’ll have a lot of storytelling, some talk and opinion, and games. “And if I do this right, I hope to make a little difference in everyone’s life and have a lot of fun doing it,” she said.

Meredith Vieira said that it’s always been very important to her to put her family first, which is why it was so important to her to have her husband Richard and her daughter Lily there. She said her sons couldn’t be there because one of them is a reporter in Washington and covering the beat there and another lived in China.

Meredith joked that Lily was her favorite child because she was the one who showed up. Meredith said she has a bracelet her family gave her when she first started at the Today Show that says “We Are With You”. She said she’ll probably be rubbing it and touching it throughout the broadcast because it makes her feel like her family is close.

Meredith Vieira asked her husband Richard what he thought of her set. The set was designed to look like their family room and even included the chair from their family room. Richard said it was an extraordinary set, but he missed his chair.

Lily said that Meredith Vieira embarrasses her a lot, but she thought it was time for Meredith to get embarrassed. She revealed a video from Meredith’s family were her kids said she was “daring”, “eccentric”, and “ditzy”. In the video, Lily said that Meredith will call her and assume she’s dead if she didn’t answer after the first ring. Richard said that if she saw a moth in the street, she’d rather drive into a tree than hit the moth.

Her kids all said that she curses constantly. Richard said that Meredith cries at everything. Lily said that one time she found her mom crying in front of the TV. She had just watched a horribly sad commercial for a mop where a family discarded their old mop for a new mop and the old mop is standing outside the door of the house and they closed the door. ‘And that’s when she said she really, she lost it,” Lily said.

At the end of the video, her boys came out to surprise her and Meredith lost it, just crying a whole bunch.

Meredith Vieira said she loved Broadway and she knew that something special was going to be done for the premiere, but she didn’t know what.

It turned out what they were planning was James Monroe Iglehart coming out to sing a song from Aladdin, with slightly different lyrics about Meredith Vieira. Then Peter Gallagher came out to sing an altered version of a song from Chicago about what a great host Meredith Vieira will be. Then the cast of Mamma Mia! came out and did a big dance number. Finally, Meredith joined the Rockettes in doing their famous dance number of kicking one leg out at a time in unison.

At the end of the number, Meredith Vieira told everyone in the audience they were getting an x360 from HP Pavilion, at the advice of Peter Gallagher to “razzle dazzle” them.