Everyone loves new co-host Michael Strahan. Finally, we got to meet the woman who started it all: Michael’s Mom, Louise Strahan! (If you missed the segment, you can watch a video at the following link: Michael Strahan’s Cake.)  Kelly told Louise that “she owes her a debt of gratitude” for bringing Michael into this world. After seeing Louise, it’s clear why Michael grew up to be such a great guy.

Louise said that Michael was a very nice child, and he was the youngest of six children. After playing “Minute of Truth” with Michael’s mom, Kelly learned that her co-host’s first word was “Mama,” his favorite stuffed animal was Peter Rabbit, and he was a big teacher’s pet. How adorable!  Plus, in case you missed it, Louise Strahan said that Michael’s favorite dinner is this Bulgogi Beef Recipe that he made previously on Live With Kelly And Michael! 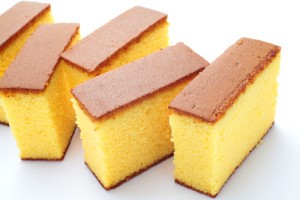 Louise also revealed that she was more surprised about Michael being named Kelly’s new co-host than him winning the Super Bowl. She is clearly a mom who is very proud of her son.

Also on the show was Regina Wooten; the family friend who stole Michael’s cake. Louise agreed to share her Butter Cake Recipe with Kelly, but only when Regina had a few armed guards on her!

Now, for the famous Butter Cake Recipe. It’s a Strahan family tradition, and Michael’s favorite cake in the world, so you know it’s got to be delicious! Here’s how you make it:

1. Mix dry cake ingredients together in a bowl.

2. Then add sour cream and oil until blended. Add eggs one at a time while stirring (Kelly said it’s a great arm workout!).

3. Pour mix into the pan and bake for one hour at 350 degrees. Let cool, then frost with icing.

After receiving lots of questions (which we love! keep them coming!) regarding Michael Strahan’s mother’s cake recipe, we are going to try to clarify a few things.  Obviously, we are not Michael Strahan’s mom (Louise Strahan), so we cannot tell you exactly what she means, but here is what our baking staff figured out.  The flour in the butter cake should be all-purpose flour (just the regular white flour you probably already have in your cabinet).  The cake can be baked in a 9×13 pan, though if you want a thinner cake, you can put it into a larger pan or you could even make two 8″ or 9″ square or round cakes.  Of course the baking time will have to be altered depending on the size of the pan that you use.  Regarding the icing, we would first whip the butter with the sugar and cocoa powder and then slowly add in the evaporated milk (which is different from condensed milk, so be careful and make sure you have the right type!) until you get the consistency that you desire.