The co-hosts have been sharing health advice all month, and this week’s theme has been healthy eating. Last on the menu were these Dessert Swaps from registered dietitian Mitzi Dulan, author of The Pinterest Diet, who shared her solutions with Michael Strahan and Robin Roberts.

A lot of people love ice cream, but a small 1/2 cup serving can have 240 calories and 14 grams of fat. Instead, Mitzi said you should peel and freeze bananas in a plastic bag. Blend them up and you have Banana Ice Cream that eliminates the fat. 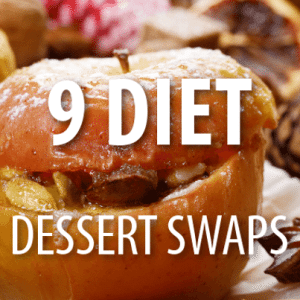 Frozen popsicles can be tempting, but Mitzi suggested eating frozen grapes instead. They are rich in polyphenols for heart and brain health, and they are a hit with kids.

Cheesecake can have 900 calories and 30 grams of fat. Instead, try combining Greek yogurt and cream cheese as a filling for strawberries, and dusting the tops with graham cracker crumbles. This swap can cut out 700 calories, while adding fiber and potassium. Robin Roberts said you still get a taste of the flavor.

Instead of Rice Pudding, would you try Chia Pudding? Mitzi Dulan said you can combine Chia Seeds, Honey, and your favorite Milk to give you some Omega-3s, protein and fiber in your dessert.

Candy bars are loaded in fat, sugar, and calories. Instead, make your own dark chocolate covered strawberries, which are lower in calories and still taste great.

Apple Pie can have 400 calories. Instead, think about combining rolled oats, cinnamon, and honey as the filling for a Baked Stuffed Apple. Then bake it and save yourself over 300 calories, while adding fiber to your diet. “That tastes like apple pie!” Robin Roberts said.

Smoothies are often high in calories and sugar. But they don’t have to be! Mitzi Dulan said you can combine frozen tart cherries, whey protein powder, and milk, boosting protein while cutting calories in your smoothie.