On April 19 2013, Kelly was missing her Michael once again. In his place was the stylish and philanthropic Carson Kressley. Michael will be so sad when he hears that he missed an amazing performance from Cirque du Soleil’s TOTEM. Also, Susan Sarandon talked about her new film The Big Wedding and why she thinks marijuana should be legal. Then, U.K. pop singer Cher Lloyd performed her new single, “With Ur Love.” 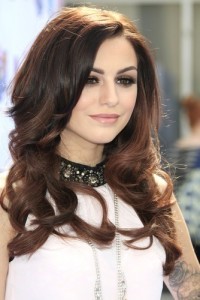 On April 19 2013, Cher Lloyd performed her second U.S. single, “With Ur Love,” for Kelly and Carson. (Joe Seer / Shutterstock.com)

Carson Kressley is a known male fashionista. He’s given countless fashionable wannabes their dream closets and dressed up their homes with his show Queer Eye for the Straight Guy. Carson comes to Live and Good Morning America to be a style consultant several times a year. He’s an author and activist for gay rights. Carson also competes in the American Saddlebred competitions and is a world champion.

Cirque du Soleil is know for it’s out of this world shows and contortionists. It’s newest show, TOTEM, tells the story of human evolution and early civilizations. They feature a wild light show and The Crystal Man that sparks the world to life.

Also on April 19, Susan Sarandon told Kelly and Carson about her latest mission: legalizing marijuana. She told HuffPost Live that she doesn’t think marijuana causes the amount of problems that alcohol does. She’s lent her voice to countless other organizations and human rights causes. Sarandon’s new movie, The Big Wedding, is packed with stars and comes out on April 26.

Then, U.K. pop singer Char Lloyd performed “With Ur Love,” her second single off of 2012’s “Sticks and Stones.” This song lacks the awkward grunting that “Want U Back” was full of. The song dropped in the U.K. in 2011, but Lloyd is quickly making her mark in America.