Kelly & Michael September 28 welcomed two of televisions biggest and best actresses: Julianna Margulies from The Good Wife and Emily VanCamp from Revenge. Plus, the hosts met with some adorable pooches who showed off their best tricks. For more information on each segment, click the links below. 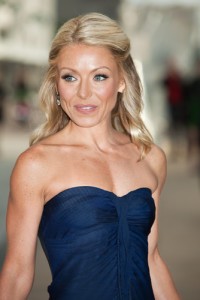 Kelly & Michael September 28 began with a big congratulations to actress Reese Witherspoon, who just welcomed a new baby boy. The hosts also described what it was like to shoot a new show opening on the streets of New York, talked about a new Staten Island ferris wheel, and also learned some bad news for Elvis fans. Plus, Bow Wow Week concluded with skilled canines who performed tricks for Kelly & Michael.

Julianna Margulies is the award-winning actress who stars as the title character in the CBS drama The Good Wife. Julianna gave the hosts a sneak peek at what to expect in season four of the show on Kelly & Michael September 28. Julianna also chatted about attending the (very hot) 2012 Emmy Awards and her four-year-old son, who is a big Giants fan.

Kelly & Michael September 28 also welcomed Revenge star Emily VanCamp. Emily talked about her family in Canada, and attending the 2012 Emmys for the very first time. Plus, she revealed exciting details from the brand new season of Revenge, which is set to premiere Sunday, September 30 2012. The show will welcome new guest stars, including Jennifer Jason Leigh playing Emily’s mother.