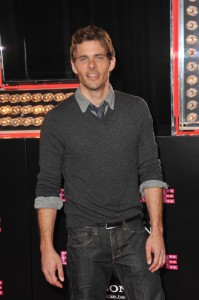 From 'Bachelorette,' James Marsden was a guest on Kelly & Michael September 6 2012. (Featureflash / Shutterstock.com)

Snooki has given birth, and the baby made its debut on the cover of People. Plus, Kelly Ripa weighed in on the surprising results of a lawsuit over the iconic red bottoms of Christian Louboutin shoes. Also, go behind the scenes with Michael Strahan at this week’s NFL season opener with the New York Giants.

Katie Couric visited the show to discuss her upcoming daytime talk show, Katie, which gets started September 10 2012. She will have many celebrity guests on the show, but she was most inspired by the story of Aimee Copeland, who survived a flesh-eating virus that attacked her limbs.

From the buzzed-about new movie Bachelorette, actor James Marsden sat down for a chat about what it was like working on the film. In a unique move, the movie is already available for rental online and on demand, before it hits theaters on Friday, September 7 2012.

What’s it like winning a second gold medal or being tweeted by the President? Those were questions the co-hosts posed to soccer stars Alex Morgan and Carli Lloyd. Then they paired off for another Challenge with the Champions.

What does Michael do in Carrot Top’s Las Vegas show? Carrot Top shows a split screen of Michael’s trademark gap alongside a photo of Good Times star Esther Rolle.

The day’s getting-to-know you highlight reel of the new co-host team featured some of their best dance moves as a duo. I guess it’s a good thing that Michael visited the show so many times in recent years, since they seem to have endless footage of these two goofing off together.