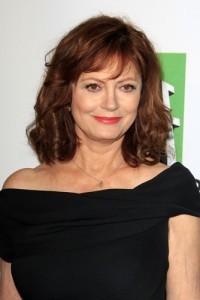 Michael Strahan is still on a spring break, so Kelly called in one of her favorite men to headline with her for Friday’s show. Queer Eye For the Straight Guy’s Carson Kressely is always dressed to the nines and quick with the wit. On April 19, look for fun, sassy talk with Carson and Kelly. Doesn’t that have a nice ring to it?

Also on this episode, Kelly and Carson talk to Hollywood legend Susan Sarandon. Sarandon is promoting her upcoming film, The Big Wedding. The film comes out April 26 and has a huge, star-studded cast. Amanda Seyfried and Ben Barnes play the engaged couple. Robert De Niro, Katherine Heigl, Topher Grace and Diane Keaton are just some of the stars aligned to play their respective families.

Robin Williams puts back on a priest’s collar for his role as Father Monaghan. Williams played a crazy priest in License To Wed. If his character is anything like that role this is going to throw movie goers into fits of laughter.

Cher Lloyd comes to Live to perform her new single, “With Ur Love.” Lloyd placed fourth on the seventh season of UK’s XFactor. She has a very strong voice, but her last single, “Want U Back,” was a little unusual. Her sudden grunting really throws the beat and flow of the song off.

“With Ur Love” has a very strange music video. It starts out with Lloyd trapped in a fairy tale tower, but then she turns into the evil queen. The women start to seduce the men at a gothic dinner party. They take pieces from all of these men and turn a mannequin into the perfect man. This song will get stuck in your head.