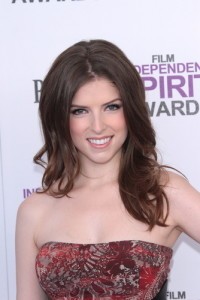 Anna Kendrick will talk about ‘Into the Woods’ with Kelly & Michael. (s_bukley / Shutterstock.com)

Then, Anna Kendrick will come by to talk to Kelly & Michael about the new movie adaptation of Into the Woods, which Meryl Streep already came by to talk about. I am so excited for this movie and I think that Kendrick is insanely talented and is so entertaining, so I’m really excited for this interview. I’m really hoping that she talks about Pitch Perfect 2 as well. Into the Woods will be in theaters on Christmas.

Finally, Sara Evans will be coming by for a performance as a part of Live! With Kelly & Michael’s Holiday Hits Week. She’ll, of course, be performing a holiday song, which should be fun. Renee Fleming already came by. She’ll probably also talk to Kelly & Michael. It should be a lot of fun and a great way to get into the holiday spirit. Sara Evans’ album Slow Me Down is available now.