Recapo Update: The articles for this episode are now online. Take a look at each segment below.

After the weekend, Live! with Kelly & Michael is all new on Monday, April 8 2013. Tune in for an interview with film and television actress Eva Longoria, plus Jordana Brewster from Dallas. Also, a performance from eliminated American Idol contestant Burnell Taylor. Here’s more on this upcoming episode of Kelly & Michael April 8. See you on Monday! 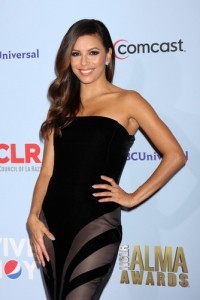 Kelly & Michael April 8 will also feature an interview with Dallas star Jordana Brewster. The Brazilian-American actress began her career on soap operas and later transitioned to roles in blockbuster films like The Fast and The Furious. Currently, Jordana stars as Elena Ramos on the TNT re-boot of the classic series Dallas.

Jordana is the latest in a string of Dallas stars who have visited the Live! with Kelly & Michael set. The hosts have recently chatted with Jesse Metcalfe and Josh Henderson. For more information on the current second season of Dallas, catch up with Southfork Ranch’s own Jordana Brewster on Monday, April 8.

Plus, as American Idol inches towards its dramatic season finale, Live! with Kelly & Michael will welcome the show’s latest cast-off. Burnell Taylor is the latest contestant to be eliminated from the show, so he will join Kelly & Michael April 8 for a great performance.