Recapo Update: This episode of Live! with Kelly & Michael has aired…

Kelly Ripa and Michael Strahan welcome soon-to-be dad Josh Duhamel to the show on July 17 2013. He recently hosted the Kids Choice Awards for Nickelodeon and he’s not returning to the upcoming Transformers 4. Also, singer-songwriter Sara Bareilles performs a song from he new album The Blessed Unrest. 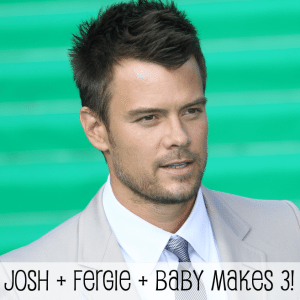 The marriage of Josh Duhamel and Fergie is not one that I think everyone saw coming. She was the token female of The Black Eyed Pea and he was the dashing Hollywood action and romantic comedy actor. Their marriage seems to work for some reason. Fergie even changed her name to “Fergie Duhamel” on July 10. She was born Stacy Ann Ferguson.

Fergie and Josh Duhamel announced ages ago that they are expecting. I think that Fergie’s pregnancy has seemed even longer than Jessica Simpson’s. The Duhamels will welcome their baby in August or early September. They’ve been looking insanely happy to be in love and adding a baby to the mix.

Also on July 17, Sara Bareilles celebrates the release of her album, The Blessed Unrest, with Kelly and Michael. She will perform her single, “Brave,” and chat about how the new album feels in the progression of her sound and music.

“Brave” definitely feels like a great addition to Bareilles’ musical repertoire. The video has her and random strangers breaking into dance  in public. A guy skips at a gym, two people break dance at a mall, and someone dances in a college library study area. The dancers get bystanders to join in. It’s an expression of joy. Just hearing the song makes you want to smile.

“Is this guy filming a video? Maybe he took the wrong pill?” a bystander says.

The song and video show that you can dance to your beat and not care what other people say. See her perform “Brave” on July 17 2913.