Recapo Update: This episode of Live! with Kelly & Michael has aired… 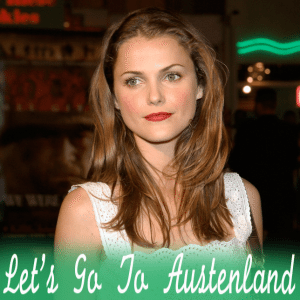 Who knows what’s going on in Bon Temps these days? Last I remember, Harry Potter’s Aunt Petunia was an evil witch attacking Sookie and Co. Yes, it’s been awhile since I’ve seen the craziest series on television, but I picked up Game of Thrones. No shame.

The one thing I can’t get out of my mind from True Blood: Joe Manganiello’s abs. The man has a 10-pack and runs around the swamplands in the buff. How can you forget something like that? He’ll be talking about the sixth season and what getting picked up for season seven means for him and his character, Alcide.

I’ve read countless romance novels in my time, but none of them come close to the love between Mr Darcy and Elizabeth Bennett. Austenland is based on Shannon Hale’s novel about a woman obsessed with Colin Firth as Mr. Darcy. You read that right. Keri Russell’s character travels to a Jane Austen resort where she can let her inner freak flag fly, Jane Austen style.

Keri Russell was pregnant with her second child during the filming for Austenland. She said in a recent interview that her character got to be a lot more voluptuous in this film than any other Keri Russell film.

Since her days on American Idol, Carrie Underwood has become one of America’s brightest stars. She’s like the poster child for Southern Belle meets Girl-Next-Door. Underwood is giving all of her fans the chance to experience her Blown Away tour with her new live CD, debuting August 13.

Check back here on August 13 2013 for more from Carrie Underwood, Joe Manganiello, and Keri Russell.