Black Man Puts On White Face to Rob a Store 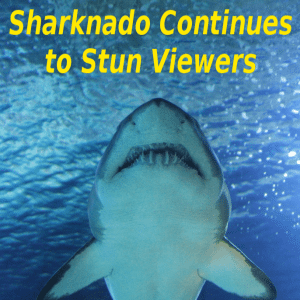 Sharknado got 2.1 million views in its third showing, but Kelly Ripa refuses to wear a Sharkini. Read how one man wore a special effects mask to rob.

Michael Strahan found the craziest headline in the paper this morning. “White Lies” reveals that a black man bought a special effects mask, made by the people that worked on Ben Affleck’s The Town, and then proceeded to rob a business that cashes checks. The effects look so real, the man actually resembles Bryan Cranston from Breaking Bad.

After robbing the store, the man wrote an email testimonial to the company, which helped them catch him. They also found the man in a shirt with the picture of the mask from The Town. The evidence was all there, it’s just bizarre.

The first two viewings of Sharknado combined didn’t add up to the third viewing ratings. A Saturday night broadcast of Sharknado brought in 2.1 million views. This could be in part to the Twitter trending topics and people like Kelly and Michael talking about the film to no end. Kelly has yet to see Sharknado, but she watched the trailer with her sons. She was really impressed by Ian Ziering’s dedication to the role.

The Sharkini is still sparking controversy with Kelly and Michael. Ripa wants Strahan to put on the Sharkini, but Michael refuses. We’ll just have to settle for doctored photos.

Denzel Washington in A Raisin In The Sun Revival

Bob Geon from Athens, Alabama played Splash Dance Trivia for the Aruba Marriott Resort and Stellaris Casino, a week long trip worth $6,600 courtesy of Orbitz. He correctly answered this question about Denzel Washington:

In what upcoming revival did Denzel Washington say he would be appearing on Broadway next year? Answer: A Raisin in the Sun