Kelly Ripa joined Iron Chef America host Alton Brown on the set of the Food Network reality show. “We do two battles a day,” he said, “which is kind of a long day.”

Kelly Ripa asked for judging tips because, although she enjoys food, she does not consider herself a foodie and does not readily recognize ingredients. Alton Brown gave her some flash cards and advised her to take notes on everything she tasted during the show’s battle. 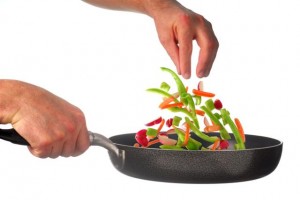 When Kelly Ripa appeared as a guest judge on "Iron Chef America," she got tips and treats from the show's host, Alton Brown.

Alton Brown revealed the day’s secret ingredient, which was olives. Kelly Ripa praised Alton Brown’s impersonation of the chairman, but the host said he has no desire to take over that role.

He also advised her not to come to the judging table hungry, because that would affect her impartiality, making whatever she tasted first seem the best.

Alton Brown advised her to taste only after everyone else tastes. This would give her a chance to listen to the chef’s presentation.

It also meant that other judges would be making comments while she was tasting, giving her something to disagree with in her own remarks, “and that always makes you look smarter,” Alton Brown said.

“Don’t eat more than two bites of this dish,” he said, citing the fact that judging involved 10 courses and too many bites of each one could make you fill up too quickly.

Robert Bleifer brought out the main course, venison loin with a fig and black olive crust and a mixed olive risotto. Kelly Ripa and Alton Brown practiced tasting and making judging comments, before Alton Brown made a play for the co-host seat on Live.

His next tip was to beware of chefs who are quick to offer liquor. “They’re usually covering up something,” Alton Brown said. The final course was an olive oil ice cream topped with olive chips. She practiced some more comments and Alton Brown praised her natural curiosity and love of food.

Finally it was time for highlights from Kelly Ripa’s appearance on Iron Chef America. Among other judges on the panel was Kathy Griffin. As the segment ended, Kelly Ripa admitted that she broke Alton Brown’s rule and ate more than two bites!